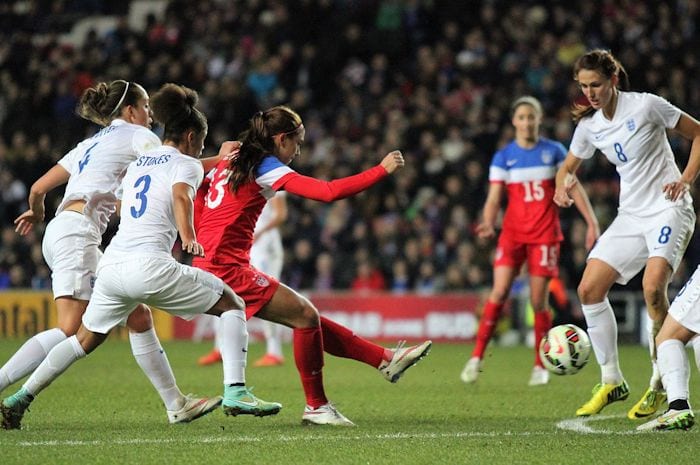 Manchester City’s Women’s team kicked off an important weekend for the football club last weekend when they beat Arsenal on penalties to lift the Continental Cup for the third time.

Nick Cushing’s side are two points clear at the top of the league table but have played two games more than Arsenal in second place. They are currently unbeaten in the league but perhaps more surprising is that nine of the players are currently on duty for Phil Neville’s England squad.

Last Wednesday, they came from a goal behind to beat Brazil 2-1 in the SheBelieves Cup.

In April they welcome Canada to the Academy Stadium. The Canadians will be out for revenge after being knocked out of the 2015 World Cup, the year they were hosts of the competition.

That game, played in front of a packed out stadium of 50,000 fans cheering on their team, will have taught the England side a lot about their own character.

England and City captain Steph Houghton believes it also proved a turning point in how the country saw women’s football in general.

“On that day we were unbelievable, the way we set up and pressed them and the result to top it all off made us believe that we belong on the big stage and showed that when the pressure is on we can rise to it.

“It was one of my favourite ever games I have played for England and it really was a turning point, not just for us as a team, but for how people thought about women’s football in England.”

She believes that the core of City players in the England team could be the difference the Lionesses need.

“It is great to have so many of my teammates with me in the England squad at the moment because of course you bring those relationships with you,” said Houghton.

“You see each other every single day so whether that is in a Manchester City environment or an England environment, the rapport we have on and off the pitch at the moment just makes life a lot easier.”

The game against Canada may well just be a warm-up for this summer’s World Cup in France, but it is also a huge stepping stone for a team who are setting their sights firmly on the bigger picture.

Following Saturday’s 2-2 draw with the United States when Houghton was on the score sheet, England take on Japan on Tuesday night in the final game before they host Canada on April 5th – one of four international friendlies prior to the start of the World Cup against Scotland on June 9th.

Speaking about the upcoming tournament, Houghton remained confident that with the right mentality we could well see an England World Cup winning side before the end of the summer.

“The preparations for the World Cup are going well and we have four games to play before we fly out to France so the mentality is just to stay as fit as we can and get used to the way Phil wants us to play.

“We have an unbelievable opportunity to try and bring that trophy home and we will be trying our best to do that.”