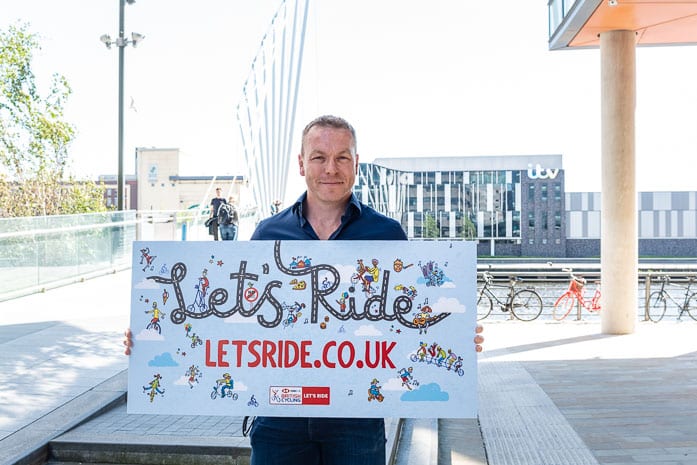 Manchester may be the home of British Cycling and one of the most accessible cities in the UK by sustainable transport, but there’s still a long way to go until cycling is attractive to everyone.

In an attempt to get more people on their bikes and create a greener, fitter, healthier Britain, 7.5 kilometres of roads in Manchester city centre will be closed to motor traffic this Sunday.

Let’s Ride is part of a shared ambition of British Cycling and HSBC UK to get two million more people on a bike by 2020.

And according to Olympic, World and Commonwealth champion Sir Chris Hoy, events like these are crucial to make cycling more appealing and to encourage people to not only attend one-time mass rides but to use the bicycle as their main form of transport.

“I think there has been a massive increase in the number of people cycling in the UK in the last 10 years or so but it can always be more,” Sir Chris told us.

“We’re constantly trying to encourage more people to get on their bikes, to choose it as a form of transport, to improve their health and wellbeing, both mental and physical.

“I guess the key challenge is to try and make it more appealing and make it actually safer as well so that people feel less inclined to take other means of transport.”

When it comes to its infrastructure, he believes Manchester is no different to other major cities in the UK.

“A lot more can be done to improve safety. I think this puts off a lot of people, especially those who haven’t ridden a bike for a number of years. That feeling of confidence in the roads may not be particularly high and therefore they choose to take the bus or to walk or take their care instead. That is the biggest challenge, to improve the infrastructure, to improve the roads and to improve their education of all road users.”

He thinks there is something else that makes Mancunians reluctant to choose a bike to get to work.

“A big barrier is to change this mentality of cyclists versus car drivers or lorry drivers. We’re all just people trying to get around cities.

“Even if you never, ever plan to ride a bike yourself, try to look at other cyclists and other people riding their bikes and think that they are just people who are very vulnerable and do your best to make them feel as safe as possible of the roads.”

Over 100,000 people attended last year’s events, cycling a combined total of over 1.5 million kilometres in the process.

This year’s event will have a strong community focus, linking up with local attractions, while along the route there will be a range of local community groups, bike shops, local performances and giveaways, with participants encouraged to hop off their bikes and enjoy themselves.

“I think events like these are a fantastic way to inspire more people to get on their bikes,” said Sir Chris.

“I’m sure there will be a cracking atmosphere and a great day out for all the families. There’s no pressure. This isn’t a race, it’s a ride – so it’s a great chance for people to cycle away from the traffic, to enjoy the city centre and see it in a different way and to inspire people make cycling part of their weekly or daily routine.”