Leg warmer alert! You can audition for Fame at immersive film pop-up

Manchester arts hub under the arches 53two will become the New York School of Performing Arts for one unforgettable evening later this month with a screening of the 1980 hit musical Fame, street food, cocktails and the chance to try out auditions yourself.

FLICK does Fame is the closest you can get to an audition for the legendary school without buying a plane ticket – or a time machine.

It’s an evening inspired by Alan Parker’s 1980 film which follows a group of students through their time studying drama, music and dance at the High School of Performing Arts in New York and features nine great songs including the number one hit of the same name.

Now it’s the turn for a Manchester crowd to experience it for themselves.

FLICK does Fame will start with auditions (optional) where you will be guided to enrolment and wait for your audition slot. When the time comes you will be taken through to the studio where you will get your chance to strut your stuff in front of a panel of teachers. 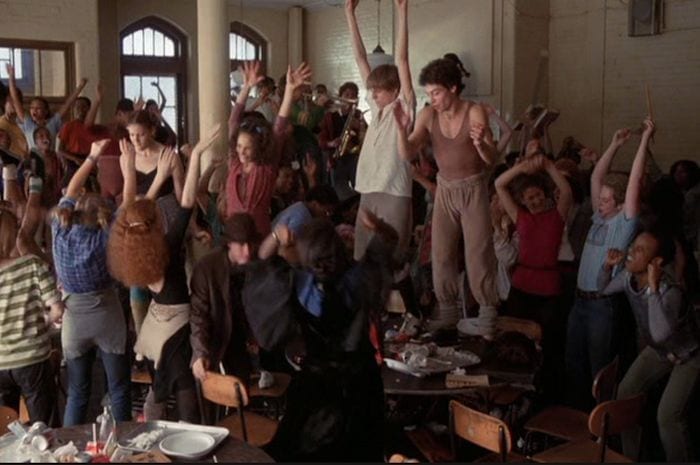 As the auditionees await their fate, there will be an immersive screening of Fame in all its 1980 glory for you to enjoy.

After the film, the winners will be announced and will enter the limelight in a packed final performance which will turn into a huge late-night party.

No need to worry if performing isn’t your thing because there will be a fully stocked bar with some very special Triple Threat cocktails and street food from Eat New York.

One thing you can’t shy away from though is the dress code – vintage gym chic – so get those sweatpants, legwarmers and sweatbands at the ready.

Darren Jeffries (Hollyoaks, T4 Freshly Squeezed, The Gadget Show), founder of immersive cinema organiser FLICK, said:  “Fame is an iconic film and one that everyone loves. At FLICK we build the fun around the film and we want to welcome people in, give a nod to nostalgia, transport the audience to their New York School of Performing Arts audition and, most of all, create a fun authentic environment for them to watch their favourite film and have a party.

“London is full of immersive screenings like this, but us northerners are catching up and I want Manchester film fans to enjoy the same experience.”

Simon Naylor, artistic director of 53two, the creative performance space under the arches said: “ I firmly believe that FLICK has the capacity to fill the current gap in the market. Underneath the arches, you can’t help but be absorbed into a world beyond the hustle bustle of the city centre – it’s like a hidden, underground shelter from the real world – and what better place to escape to than the world of FAME!”

With retro prizes for the best dressed, plus booze, music and dancing aplenty til the bell rings at midnight, FLICK does Fame looks like being an experience not be missed.

But, please, no dancing on cars.