The Americans have got special days for almost every food, particularly junk food. For example, there’s National I Want Butterscotch Day (February 15), National Candied Orange Peel Day (May 4), and who could forget Gummi Worm Day (July 15). No wonder they celebrate National Bicarbonate of Soda Day (December 30). They probably need it after eating so much junk food.

‘Like most mass
produced foods,
it’s cheap because
it’s made from
cheap ingredients’

The US is the biggest consumer of ice cream in the world. Americans eat on average 20 litres of ice cream every year. We eat just nine. We’re not even in the Top 10 ice cream eating countries in the world. There’s only one Haagen-Dazs shop in London and two in Northern Ireland. There are 28 in France and 14 in Germany.

It can’t be because of the climate because the Scandinavian countries all eat more ice cream than we do.

We think it’s because most of the ice cream in this country is not very good. Like most mass produced foods, it’s cheap because it’s made from cheap ingredients. It may look like ice cream, we may even think it tastes like ice cream, and legally it is ice cream because it contains the ridiculously small amount of dairy produce required to be defined as such. But it’s not proper ice cream. It bears about as much resemblance to proper ice cream as a cheap sliced loaf does to proper bread.

This is what the ice cream sold by a popular high street restaurant chain contains:

It’s cheap, but you get what you pay for. Proper ice cream should contain cream, sugar, eggs and natural flavourings. The only additional ingredients it should contain are the bare minimum required to ensure it doesn’t deteriorate from manufacture to sale. 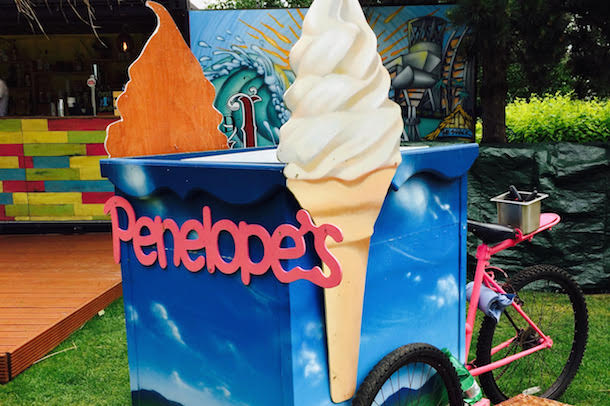 Proper ice cream used to be much more widely available in Manchester than it is now. Most of it was made in Ancoats by first and second generation Italian artisan ice cream-makers and sold from ice cream vans.

You can still get proper ice cream but the choice is limited, particularly since the sad demise of Fresco Freddo’s in 2013.

So we say three cheers for Joe Delucci’s in the Arndale, Ginger’s in Affleck’s and Penelope’s at Media City.

Have we missed any? Do let us know.

VIDEO: How To Make The Perfect Vanilla Ice Cream