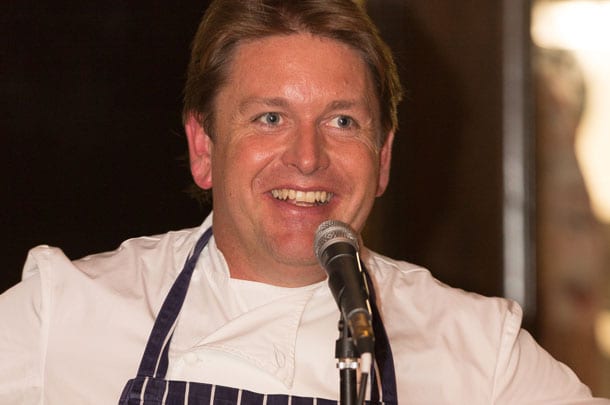 Housewife heartthrob James Martin opened at 235 Casino, the latest in what seems a long line of high profilers to target Manchester.

So with the buttons on our trousers still popping following the epic Manchester House launch, we just had to go down for a sneak preview, all in the line of duty, of course.

The new eatery has taken over what was Linen at the top of the Deansgate casino and has had a bit of a paint job but seems to have retained what was always a lovely open room with exposed brickwork and wide open spaces between tables. 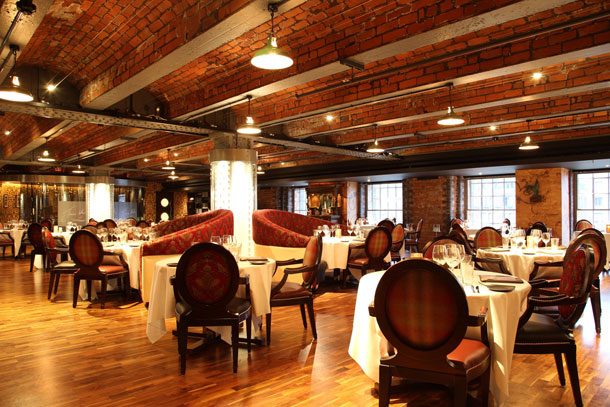 The look is a little rural country kitchenish with an old school feel which matched the teasing taster menu we and other journos were treated to.

For those who don’t know, Mr Martin is a regular on the telly with his down-to-earth Yorkshire tones and basically is viewed as a good egg – a good chef – and to women of a certain age, the Harry Styles of the kitchen.

He has put his name to the joint and it’ll be interesting to see how often he’s around but certainly he was rolling up his sleeves and getting stuck in on the night we went.

The dishes, he told the adoring throng, are a mixture of his classics with some new ideas from his travels with a focus on the ageing of the meat, using techniques picked up abroad and applied to local produce.  In fact, most of the meat is being shipped in from Yorkshire including Yorkshire Wagyu.

The starter sounded terrifically complex, (not sure my shorthand was up to it), but as he rattled off the ingredients and TLC given to the dish I think I have this right. It was salmon bathed in single malt and cooked in the whisky with vanilla. The cucumber ketchup was the very Platonic ideal of cucumber and a black squid ink wafer seemed to have been spun by virgin nuns. 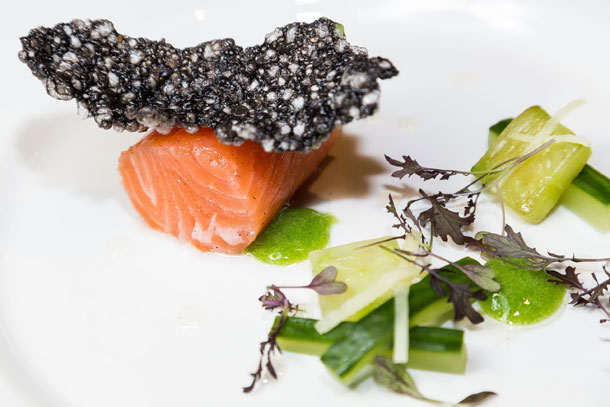 “…I could have eaten a stack of the black ink squid wafers like crisps.”

Ummm. It actually just tasted very watery or flaccid as someone said on my table. I did really like the black squid ink wafer and could have eaten a stack of those like crisps.

I started to feel a stab of pity for the team rushing around like they had all tried to pull this together at the last minute, particularly as this was so hot on the heels of the frankly shock and awe spectacular preview at Manchester House which had much the same people attending.

“…fillet of beef that you could have cut with a spoon…”

Then, thank the Lord, the main dish came and this was a superb roast fillet of beef that you could have cut with a spoon.  So tender, like butter and just wonderfully tasty. 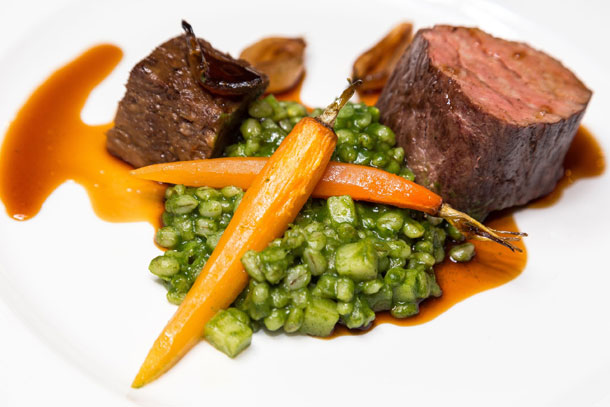 An accompanying piece of Jacob’s Ladder – a very bony part of the bovine which has to be cooked and tweezed for a billion years – was also tasty.  I adored this, though other people said it reminded them of their nan (presumably meals they had with their nan rather than it looking like her).

Risotto and other veg were tasty and well done but did give it quite an old school if not a very upmarket school dinner vibe (you could imagining Cameron and his cronies tucking into something similar at Eton). I was half expecting some Bisto.

Onto pud and again the dishy chef came out to give us the litany on what had gone into it all. A speech which he had no doubt given to moistening housewives up and down the country a million times. 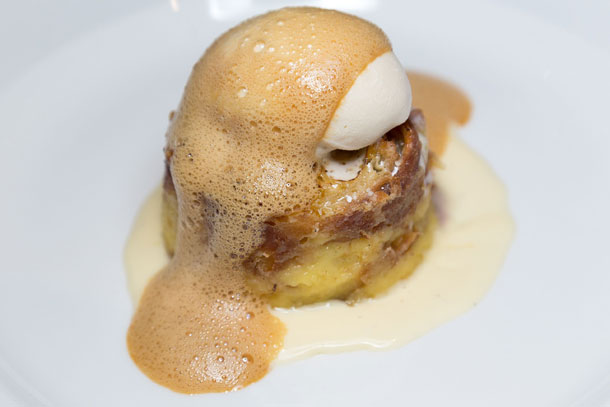 It was White Chocolate and Whisky Croissant Butter Pudding with Single Malt Ice Cream – a wonderful take on bread and butter pudding. It’s one of his signatures and has been on his menu for twenty years, but presumably not this particular one.

I normally don’t like anything resembling bread and butter pudding but this was simply fabulous. A mixture of textures as you delved down the dish and just wonderful sweet flavours.

It more than made up for a disappointing starter and gave a sweet promise of things to come from Mr Martin.

We will be back to review this properly but, in the meantime, the odds are favourable for James Martin Manchester and a welcome addition to our burgeoning  culinary culture.