The first 'Too Many Critics' event to happen outside of London... 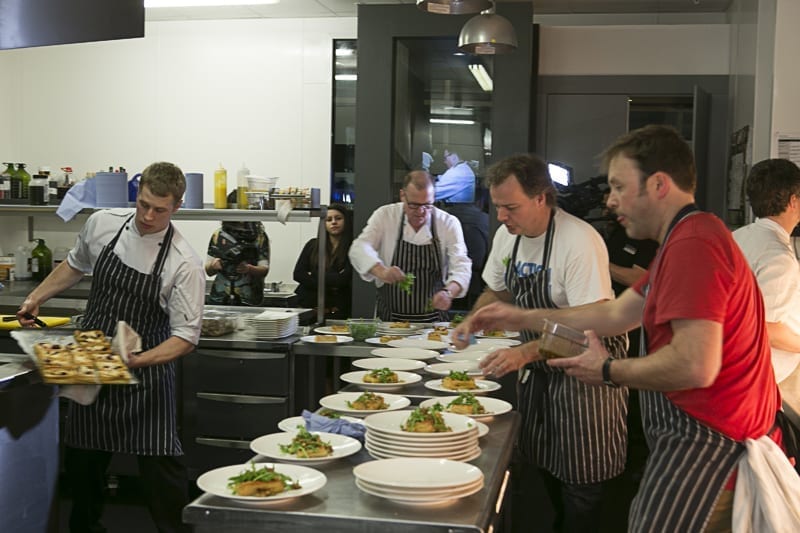 The first ‘Too Many Critics’ event to happen outside of London took place at acclaimed Damson Restaurant at MediaCityUK last night (Monday 17th March), raising a whopping £13,000 for humanitarian organisation Action Against Hunger.

“…such an exciting time for the city’s dining scene.”

The ‘hells kitchen’ style event was devised to turn the tables on some of the nation’s best regarded food critics – putting the chefs and restaurateurs in the ‘role reversed’ position of critiquing the efforts of their arch enemies!

A team of top food critics found out what it was like to be on the other side of the pass as they catered for a room filled with 130 of the region’s best known chefs and restaurateurs.

The evening was hosted by BBC’s Nigel Barden. The game group of journalists came from around the UK – half from Manchester and half from London:

Guests enjoyed a Taittinger Champagne and canapé reception in the magnificent surroundings of Damson with stunning views of MediaCityUK. They were then able to enjoy all the thrills and spills from the kitchen as the action was streamed live on screens around the restaurant.

This was followed by an auction with guests bidding for a raft of one off prizes including the chance to review a restaurant with Jay Rayner, take a holiday in the Gambia, purchase some unique fine art, and even have Gordo cook in their home!

The amateur kitchen team succeeded in feeding the guests in good time and received a largely positive reception to their efforts – no mean feat for an audience who were certainly prepared to be free and easy with the critiquing.

The writers’ culinary prowess was put to further test as the critics were pitted against each other in a tense, extra ‘pie challenge’ on the evening too! Each critic was asked to present their own signature pie to a panel of the region’s most influential taste makers including Lisa Allen (Northcote Manor), Simon Stanley (Damson and The Red Lion), Mary-Ellen McTague (Aumbry), Aiden Byrne (Manchester House) Robert Owen Brown (formally Mark Addy).

Mark “Gordo” Garner walked away from this element of the evening victorious with his hand crafted steak and kidney pudding.

“It was superb to see Too Many Critics get off to such a great start in Manchester. We’ve worked really hard to establish this event at such a high level in London, so were hopeful that we would get just as enthusiastic a reception in Manchester. Damson and the hospitality sector certainly haven’t let us down on that front! We hope this will be the first of much more activity for us with the food and drink industry in Manchester, especially at such an exciting time for the city’s dining scene.”

“Although the critics got a bit of hard time, the evening has been tremendous fun, and they were fantastic sports. Hats off to them too for serving a good dinner! We were proud to host this event and be a part of raising funds for such a great charity – we look forward to welcoming Action Against Hunger back to Greater Manchester again next year”

“I like Action Against Hunger because they make a targeted, sustained difference to communities in crisis. A very good example being Syria and neighbouring countries, where thanks to the charity, we have been able to see the refugee camps go from misery for the children there, to a point where at least something like normal life can resume for them. A charity well worth backing.”

“Having grown up in Africa, I’ve seen the work that charities like Action Against Hunger do, so it’s a real privilege to be involved. I’ve also got baby twins, so the fact that the charity does work like engaging with communities to spread the word about the health benefits of breastfeeding is something I can really relate to. As a food writer, today has been a real insight into what it’s really like to cook for the public. I don’t think I’ll be any less critical in the future, but I have a better understanding of the pressures that chefs are under.”

“The sheer scope of what Action Against Hunger does is so impressive, reaching out to more than 40 countries and tackling what is a world-wide problem. I was honoured to be able to help and really enjoyed the experience of cooking in a Damson kitchen, where all us journalists worked as a team for a change! The staff were fantastic, and the guests managed to stay (just about) under control too – a really great event to be part of.”