‘I love Manchester – it’s as simple as that’: artist Jean Hobson captures the face of a changing city

Jean Hobson has been passionate about art since childhood. “I was eight when I decided I wanted to be an artist,” she says.

“We lived on a council estate on the Wirral when I was growing up, and it was right next to some fields. My dad used to take me out sketching.”

Jean graduated from Liverpool College of Art before moving to Scarborough in 1972 where she taught and then ran a small hotel – The Flower in Hand – while raising her two daughters.

She became renowned as a vegetarian chef, played accordion with a blues band, and opened her first studio.

“I first bought an accordion during the miners’ strike,” says Jean. “We were told we couldn’t collect money for them, but when I asked the policeman what I could do, he jokingly said I could busk. One of my friends played the saxophone, so I learnt three chords on the accordion, and we busked.”

Though busy raising two small children and running a hotel, Jean learnt the accordion properly and joined a band. But she always found time for art.

“Even though I was playing two or three nights a week with the band, and I had the hotel, and I was looking after the kids on my own, I always made a point of doing at least an hour’s painting every single day,” she says.

Jean moved to Glossop in 1992, working with community groups and children, and made an eye-opening discovery while working with a group in Gorton.

“That’s when I realised there was this huge part of Manchester I just didn’t know anything about,” she says. “Basically, Gorton and Ancoats. It was one of those moments that changed my life.

“After work I started driving around and taking photos and doing sketches, and I realised the changes taking place in the city were just incredible.”

Jean started out doing pencil drawings and then screen prints, but found that her city pieces needed a different medium. “That’s when I started using gouache, as it’s a lot flatter and denser and you can get more block colours.”

Jean’s pieces have been exclusively of Manchester over the past decade, and she can’t see herself doing anything else for the foreseeable future. Her latest solo exhibition, opening on 29 September 2017 at Contemporary Six gallery on Princess Street, will showcase them.

Jean has produced paintings, prints and drawings from photographs and sketches which sympathetically record the places that have captured her imagination and which she feels form a unique view of Manchester – whether recording old buildings before they disappear, or capturing new buildings as they emerge.

“My favourite building was Ancoats Hospital,” she says. “I think it should have been saved. At least the facade has been saved.

“Equal to that is the Town Hall. I think it’s amazing. I’ve painted it loads of times, and I just think we’re so lucky to have somewhere like that where you can have a gathering, where people show unity, whether happy occasions or sad occasions. It’s iconic.”

Although she is upset to see the demolition of some old buildings, Jean’s work does not come across as anti-development or sentimental, and she is equally impressed by some of the city’s emerging architecture.

“Some of the new buildings are wonderful too. It’s great what you can do with glass now, that you couldn’t 50 years ago. And I love the contrast between old and new.

“I think most architects are conscious about blending the old and the new together and making it work. They’re not just creating a new building for the sake of it. They are actually conscious about the environment it’s going in.” 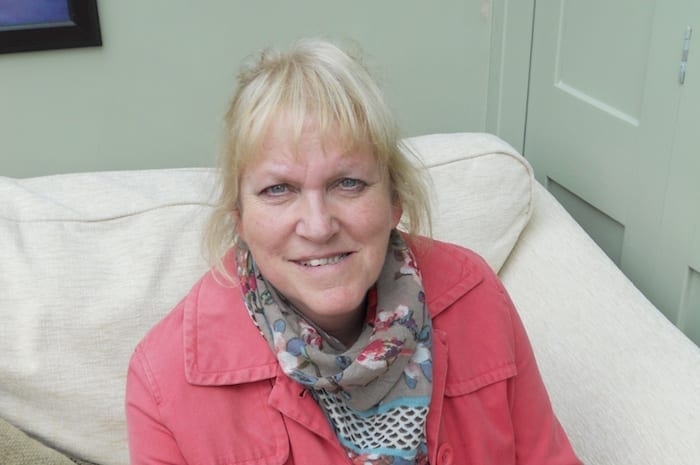 Jean’s vibrant images have won her many fans, including the late jazz singer George Melly who described them as “both realistic and poetic… they encapsulate the pleasure and vitality of the north.”

Visitors to Jean’s new exhibition My Manchester will be able to see around forty of her Manchester pieces on display until 13 October.

“Hopefully it will stir a few memories for people,” she says. “I love Manchester – it’s as simple as that. It’s a wonderful city, and we’ve got so many amazing buildings. And most of them are accessible.”