How to survive Xmas week in the office without getting fired

At the office we’re in a state of limbo between work and play. 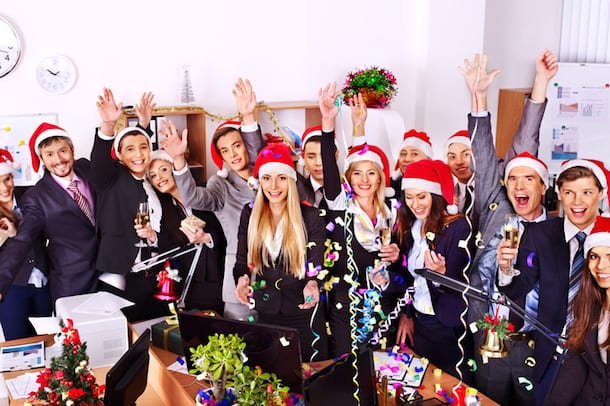 Jose Mourinho’s been sacked. He’s not the first person to lose their job just before Christmas and he won’t be the last. Ostensibly, he was dismissed because of “discord” between him and his players. But the sacking came shortly after the staff Christmas lunch and annual party. Could the two events be by any chance related, wonders Stephen Lewis…

It’s Christmas week. The big day is not far away. The day when you can finally tuck into your Christmas dinner, put your feet up in front of the telly with a drink and a nice big (but not as big as they used to be) tin of Quality Street, and watch The Great Escape for the 100th time (and fall asleep before it finishes once again).

But at the office we’re in a state of limbo between work and play. The decorations may be up and you may feel like winding down, but there’s still work to be done.

To get through the week without losing your job, it’s important to gauge the mood of the office, especially if you’re new. More importantly, ascertain whether or not your boss is a Scrooge.

Appearances can be deceptive. These days, not all Scrooges have long grey hair, wear fingerless gloves, write with a quill, and say ‘Bah! Humbug’ every so often, so be on your guard.

If, on the other hand, you’re the Scrooge and just want to get on with your work because, after all, that’s what you’re paid for and, well, Christmas is a bit of a pain in the arse, just grin and bear the faux bonhomie. You may be devoted to your work but you don’t want the unenviable reputation of being known as the office Scrooge.

Be wary of Secret Santa. It’s a great opportunity to have a dig at someone you don’t like under the cloak of anonymity. But if you do draw the name of someone you’re not fond of, resist the temptation to buy them an inappropriate gift. It could cause upset and result in you being exposed as the culprit by a process of elimination.

But the biggest threat to your job security is, of course, the office party, especially if you’re not a big drinker. The festive season is the time of year when the half a shandy brigade feel obliged to drink more than they should, and end up doing all sorts of things they wouldn’t not normally do, some of which could get them into a spot of bother.

Remember the office party is not a normal party. It’s the works do. So it’s probably not a good idea to do certain things you might do at a normal party, especially anything which involves the consumption of illegal substances.

As we all know, alcohol makes you frisky, so when it comes to, ahem, the opposite sex, (or the same sex if you are that way inclined), the normal rules of engagement do not apply.

Exercise extreme caution and remember, it’s not a good idea to pee in the company pool, either literally or metaphorically. Thanks to camera phones and social media, anything more than a peck on the cheek isn’t just for Christmas. It’s for life. Just ask Zoe Ball, who was pictured in the papers this week kissing a 22-year-old boyband member at a Strictly Come Dancing spin-off Christmas party.

It’s probably not a good idea to tell your boss what you think of him or her. Unless you like him or her, of course. The same rule applies to the boss’s son. And don’t get into a fight with anyone.

If the party is in the office, under no circumstances photocopy your arse. It’s not big and it’s not funny. Don’t photocopy it even if it is big and funny.

Don’t let your guard down because your boss will be watching you, mark my words.

If you can remember all these rules, I’m sure you’ll have great week and become a Christmas-week-in-the-office survivor. Because, unlike Jose Mourinho, you probably won’t get a severance package worth in the region of £12m.

And finally, remember, never drink and drive, and never, ever tweet when you’re drunk. You know you’ll be sorry.