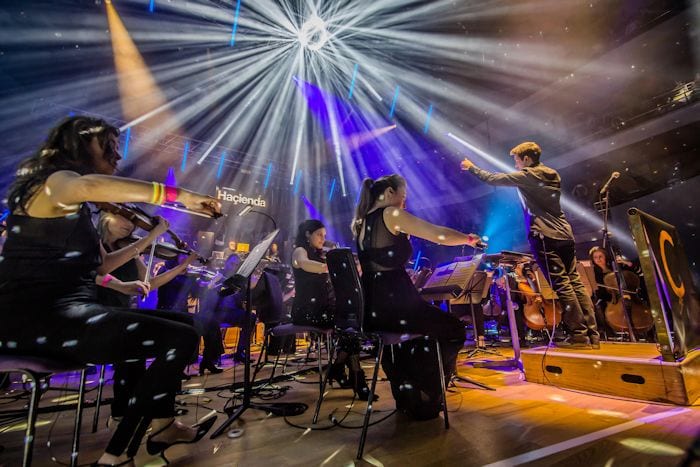 Hacienda Classical is back in town for a homecoming concert at Bridgewater Hall, the venue where it held its debut performance one cold February night in February 2016.

What was supposed to be a one-off show is now into its third year.

The Hacienda/orchestra hybrid has performed forty or so concerts to audiences totalling well over 300,000, selling out the best venues across the UK as well as taking signature slots at high profile festivals including Isle Of Wight and Glastonbury. The show recently performed its first European date in Switzerland.

This concert is the last chance in the north west to catch this year’s much praised new set, prepared by DJ’s Graeme Park and Mike Pickering, executive producer Peter Hook and musical director Tim Crooks. Audiences and critics have called it the strongest yet.

In addition to the main performance featuring Graeme Park, Mike Pickering, and Manchester Camerata, a roster of FAC51 DJ’s, including Allister Whitehead, Tom Wainwright, Peter Hook and Bobby Langley, have been added to the line-up to entertain the audience prior to Hacienda Classical taking the stage.

As The Hacienda’s dance heritage has collided with the world of classical music, these concerts have been widely praised and received rave reviews from audiences and critics. These inspirational nights have recreated the tunes that defined a generation at the original club, refreshed and rearranged.

“We’ve learnt a lot and developed the show to make it bigger and better then ever,” says Graeme Park, “so its thrilling that we’re going back to where it all began and just a stone’s throw from the original site of The Hacienda. This will be something special indeed.”