Given the spate of recent closures in the Northern Quarter, you might’ve presumed Bluu in the Old Smithfield Market had also fallen victim.

In fact, the company behind it had simply taken the proactive decision to rebrand and this Friday, the doors will open once again when they relaunch as Foundry Project.

There are already sites in Harrogate and Edinburgh, and while there are similarities between the venues, each has its own unique style. 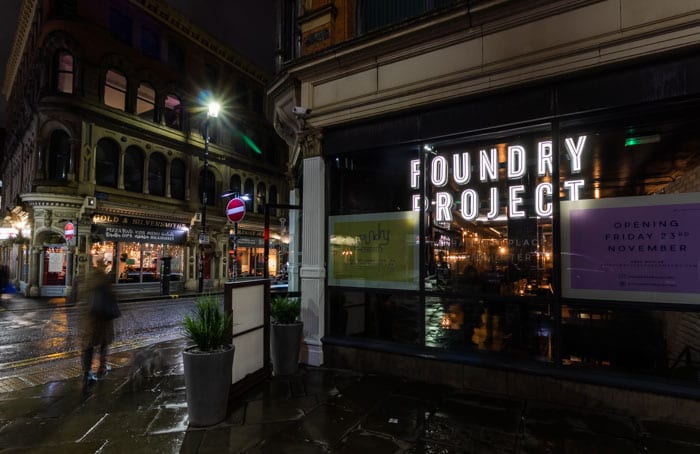 “Some of the same team are still here from Bluu and it’ll still be that local bar you can come to,” says brand manager Andrea Beckett.

“We’ve just brought it in line with the current market, so we can give people what they want.”

There was a real buzz about Bluu when it first opened over a decade ago, but the bar and restaurant scene in Manchester has changed tremendously over the last few years, and with Bluu, what once felt fresh had begun to feel dated.

“We’d known we had the site to do the conversion with for about six months,” says Andrea. “Obviously the building’s listed so planning permission took a lot longer than we thought, but the actual site’s only been closed for about nine weeks.” 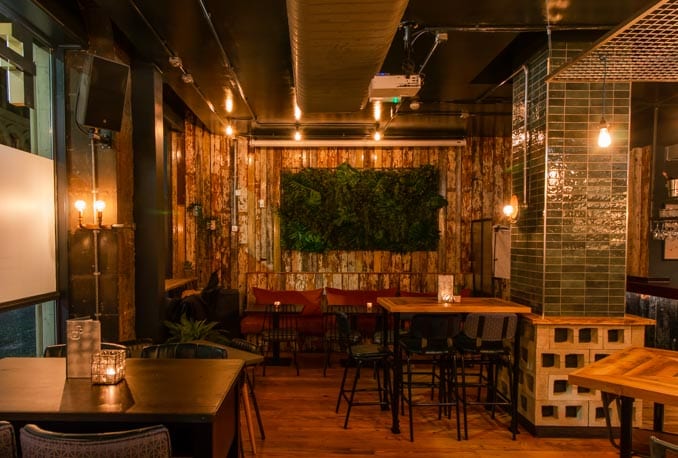 Structurally, nothing new has been done. The bar remains where it was, as does the restaurant.

“Everything we’ve done is cosmetic with new furniture, mood lighting, wall coverings and retiled pillars. We’ve just made it a lot softer. It was very stripped back before, it looked more like a nightclub than a bar and restaurant.”

The most prominent feature is the new Estrella tank that dominates a space close to the entrance. The first of its kind in the UK, it promises the perfect pint and is set to be a unique selling point, providing the only draught lager in Foundry Project. 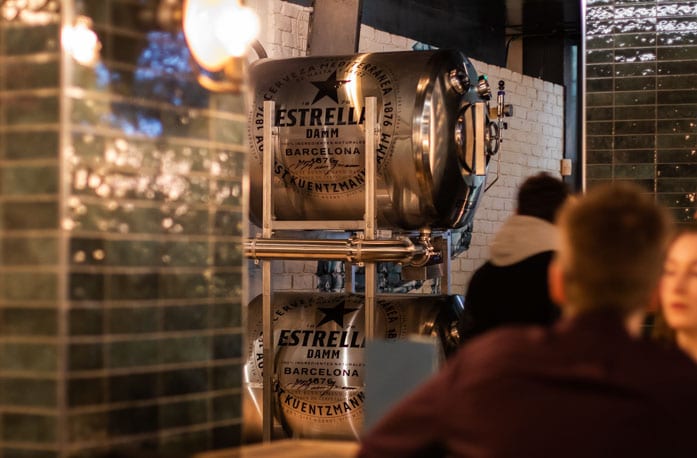 “With Bluu we didn’t have anything special to offer so we just became that really run-of-the-mill, middle-ground, middle-priced bar and they’re the ones struggling at the moment,” says bar manager Joe Wayper.

“You have to be ether premium high-end, where you can charge £5.50 for a pint, or you’re Wetherspoons where it’s £2. I believe we’re now at the premium end of things, but people are a lot less price conscious now if they’re getting an experience and a fantastic product.”

Aside from Estrella, there’s also a choice of craft beers, ciders, wine, Bloody Marys, mocktails and an enticing cocktail list created by the bartenders. 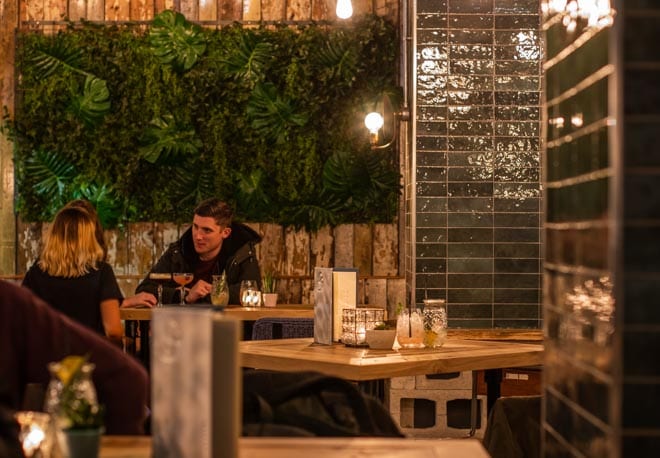 “It’s not too dissimilar to what people are used to but with our own twist,” says Andrea.

“There are also long and short cocktails with drinks like One Fine-Apple and the childhood-inspired Rhubarb and Custard, garnished with a hard boiled sweet. They’re all individual and with a backstory so you shouldn’t find the drinks in any other bar.”

A new, larger food menu has also been created, focusing on tasty comfort food that’s going to fill you up before a night out, or provide just what you need the day after. 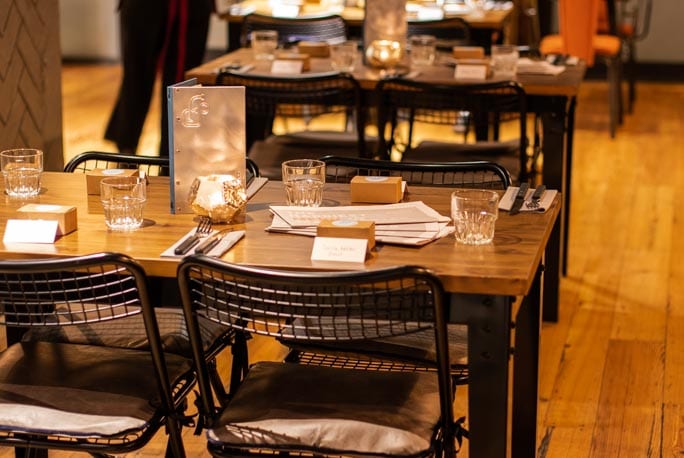 The succulent burgers include the likes of lamb and goats cheese and bhaji options; there are pizzas such as peri-peri king prawn and spicy chicken and chorizo beautifully cooked in the brand-new pizza oven; and if you’re trying to be well-behaved, a range of salads too.

There’s also a snack selection that includes tacos, halloumi fries and sesame miso wings to tuck into; a choice of sides; a kids’ menu; and two light but decadent desserts, tropical mess and chocolate donut mess, that are made for sharing.

Notably, 50p from every beer and onion burger and spiced lamb and aubergine pizza will be going to the charity Forever Manchester to help fund community groups. 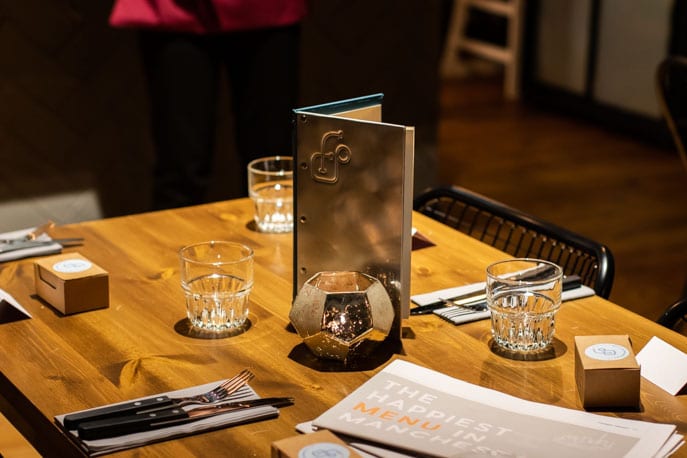 The restaurant area has been refitted with the booths being removed to provide a more open space.

“There are plenty of big tables, which are great for the bottomless brunches we’re going to be doing on Saturdays and Sundays but all the food is served throughout the venue so you can eat in the bar if you prefer,” says Andrea.

There’s an open shipping container providing a separate seating area in the restaurant, “and somewhere for larger dining groups to go.

“People can also book the space downstairs for private hire. It’s now partitioned off with a fully-stocked bar offering everything but the draught lager. It has a speakeasy feel so it’s darker and more intimate than upstairs.” 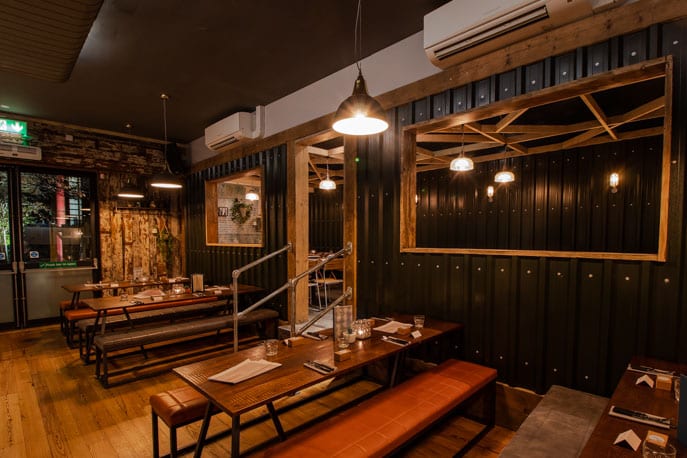 There will still be a DJ and dancing at the weekends and when the last diners have left the restaurant, the tables will be cleared to provide extra bar space “and somewhere quieter for people to go,” notes Andrea.

“We also welcome people who want to lounge around with the laptop and a coffee during the day.”

With the venue refitted and rejuvenated, Joe and his team are raring to usher in a new era for the site.

“The dynamic of the Northern Quarter has changed completely and people’s expectations when they go out are completely different to even five years ago,” says Joe.

“It’s not about being over-the-top. As an industry we overcomplicate things but at Foundry Project, what we do is quite simple, but we do it well.”