Foodinate: buy a meal, donate a meal at no extra cost

Some people can barely afford to feed themselves or their families... 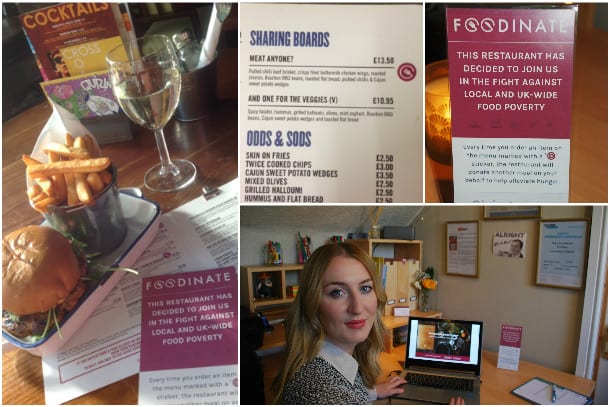 When it comes to dining out in Manchester we’re definitely spoilt for choice. The restaurant boom shows no sign of abating and it seems like there’s a new place to eat opening almost every week. Not that we’re complaining or anything. With so many places to choose from, you could probably dine out at a different place in the city centre every day for a year, if you could afford it.

The number of new restaurants opening in Manchester is an indicator of the economic success the city is currently enjoying. But you don’t have to walk very far in the city centre for signs that some people can barely afford to feed themselves or their families let alone dine out.

The council says there are around 40 rough sleepers in the city centre alone but local charities believe this is just a snapshot and that the real figure is double. These people are just the most visible. Plenty more people are struggling to feed themselves and their families.

And in a survey conducted by Kellogg’s a couple of years ago, 15% of people in Greater Manchester said they had to borrow money to buy food – the highest proportion of all places surveyed in the UK.

Restaurants such as Solita, Hawksmoor, Beef & Pudding, Mughli and Splendid Kitchen are doing their bit through Not Just Soup, a weekly soup kitchen which provides high quality food to the homeless.

Now a local woman has launched Foodinate, a new initiative which enables both diners and restaurants to have a direct and significant impact on food poverty in Manchester.

Like the best ideas, the premise is simple – that each of us can do something to help someone who cannot afford to eat, simply by choosing to eat at a participating restaurant.

For every Foodinate-designated meal ordered at a participating restaurant, the restaurant will donate a sum of money to a local charity which will enable it to provide a nourishing meal for a person in need.

The scheme is currently undergoing a one-month pilot in local bars and restaurants including The Blue Pig and Odd Bar in the Northern Quarter and Oddest Bar in Chorlton. The Booth Centre, a day centre for homeless people, is serving the meals that have been funded via the pilot scheme.

Foodinate is the brainchild of Caroline Stevenson, a 23 year-old psychology graduate from Manchester, who started developing the social enterprise shortly after leaving university. The venture is still in development but it has already been awarded a Do It award from UnLtd and been featured in the national press.

“It’s all about giving the consumer a choice,” says Caroline. “In the UK, we are already choosing to go out to eat 1.4 billion times per year, so why not make the choice to eat at a Foodinate-partnered restaurant, knowing that every delicious meal we enjoy will provide another meal for a local person in need? If everyone made that choice – just think of the impact we could have! The potential here is absolutely enormous.

“The pilot only started two weeks ago but the responses I have received from the general public and the restaurants involved have been overwhelmingly positive – far greater than I could have hoped for at such an early stage!

“Originally I was thinking we wouldn’t be in a position to launch until late next year, but given the success and fantastic feedback so far it’s looking like it could be much earlier than that – possibly even before Christmas! It all depends on how many restaurants continue to contact Foodinate to discuss getting involved and how soon they do so.”