It’s hard to believe that three weeks ago, this new venue on the corner of Chapel Street and Booth Street – The Punch Bowl pub until it closed in 1997 – was an empty building. Thanks to Kickstarter and a lot of hard work by Mark Ashmore and the Future Artists collective, it’s now a creative space.

“Morrissey was good to work with. He brought along all his props, even his cat”

Manchester So Much To Answer For is the launch event, an exhibition featuring the work of former NME photographer Lawrence Watson.

He’s the man who captured the rise of the city’s top bands – a Londoner who came to Manchester in the 1980s because he knew things were happening here. The man behind the image which has probably done more to boost tourism to Salford than a hundred marketing people could – The Smiths standing outside Salford Lads Club.

What you first notice is the sheer originality of the exhibition, 2,000sq ft of musical archive  split between two floors focusing on the 1980s, with many previously unseen shots.

The arrangement of the photographs is spot on, with two upstairs galleries full of natural light  bringing them to life. A pictorial history of local music unfolds before you. There’s Morrissey cuddling his pet (“Morrissey was good to work with. He brought along all his props, even his cat”). There’s Ian Brown on a Moss Side Street painted pink for a Barbie commercial (the street, not Ian Brown). There’s The Buzzcocks, New Order, Oasis, The Charlatans. Lawrence’s love for what he does is self-evident. 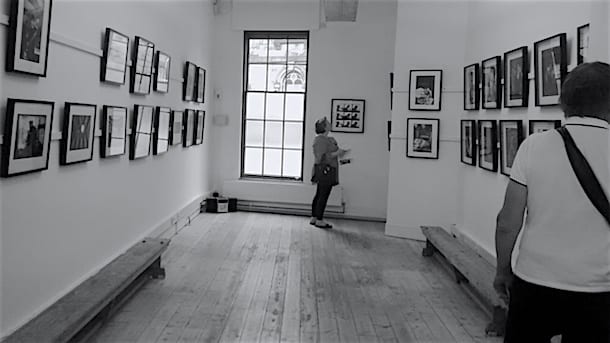 There’s also a replica of 1980s teenager’s bedroom where you can interact with the exhibits.

The basement boasts big scale shots, cover sheets, a space which resembles a darkroom, and a rolling film of an interview with Lawrence.

For a man who remembers being star struck as a young photographer watching Paul Weller carry out a sound check (“My knees were trembling”), he clearly quickly got into his stride. 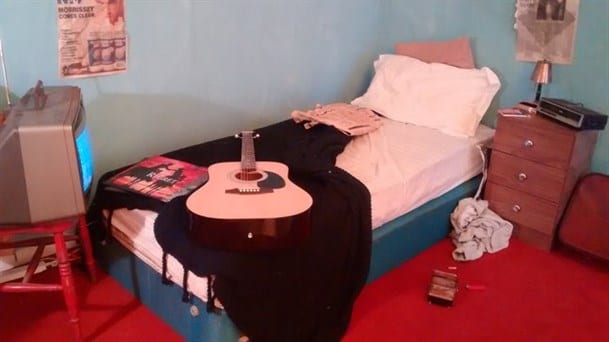 He feels lucky to have been able to work with bands whose music he likes, musicians “who appreciate where they’ve got, who’ve had to work hard for it.” This is something Lawrence appreciates himself. In the pre-digital age when photographers weren’t paid for the film they used, every shot mattered. “Back then shooting film, you had to be frugal – you developed a particular discipline.”

He describes “the luxury of spending time with people,” as something he particularly enjoyed. It’s a far cry from today’s world of camera phones, instant images and social media. “Nowadays, phones seem to give people everything they want.”

As a result of the relationships he developed with the musicians he photographed, he is still working with some of them today, including Noel Gallagher’s High Flying Birds.

His biggest regret? “It would have been great to get some pictures of Johnny Cash, The Rat Pack.”

The exhibition is definitely worth a visit. The gallery is next door to the Home of Honest Coffee, Future Artists’ other venture on Chapel Street – proof that they are a social enterprise which means business.

By the way, a big thumbs up for Salford City Council. Chapel Street was spotlessly clean on launch night. Not a bit of litter to be seen anywhere. Manchester City Council please take note.