Falling in Love with Broadway All Over Again

They say that the old musicals are the best and that’s certainly true of Annie Get Your Gun at the Opera House.

“The show reflects the attitudes of its era”

Annie Get Your Gun features Jason Donovan who, despite being best known as Scott in Neighbours, is a seasoned stage actor who has appeared to great critical acclaim in Priscilla Queen of the Desert and Joseph and the Amazing Technicolor Dreamcoat. He plays our hero Frank Butler, an old cowboy sharpshooter we are supposed to like in a macho kind of way, on his way to taming mouthy sharpshooter Annie Oakley, played superbly by twice Olivier nominated Emma Williams, whose CV includes Chitty Chitty, Bang Bang and Love Story.

Few shows have so many fantastic numbers from There’s No Business Like Show Business to Anything You Can Do which features a quite brilliant breath sapping and high note virtuoso performance by Williams which brought the house down.

By the time that song strikes up towards the end of the show you can only marvel at the genius that was Irving Berlin, a man whose tunes and lyrics are still embedded in the public’s consciousness after nearly seven decades. 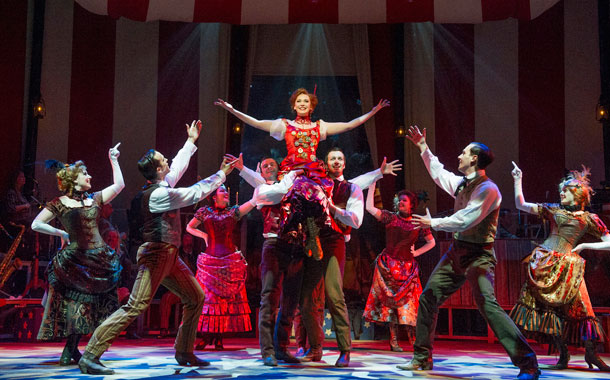 So to the story. Annie, a revolutionary old fashioned gal joins Buffalo Bill’s Wild West show and is smitten with Frank from the outset. Frank meanwhile feels threatened and is scared of losing his macho image as the best sharpshooter in the west. Annie steals his headline act and Frank leaves to join Pawnee Bill’s show.

But, as in all in the best love stories anyway, fate transpires to bring them together a year later when the two shows merge and Cupid’s arrow hits the spot. Annie finally gets her man by deliberately losing to Frank in the shooting match finale.

The show reflects the attitudes of its era. If you are going to do it, then you have got to do it as close to the original as possible. Ian Talbot’s production is bright, energetic and colourful, a show with true old fashioned virtues which make you realise what a true musical should be like.

The star of the show by a country mile is Emma Williams who delivers Berlin’s songs with the same pinpoint accuracy that she brings to her marksmanship – a polished performance all the way through the show. One can only compliment all the actors for their Texan accents which make you feel you were back in the good ole Wild West.

Jason Donovan is excellent as the strutting, cocksure but not unlikeable Butler and Kara Lane who plays the feisty Dolly Tate deserves a special mention.

If you can’t get a ticket steal one!

Showing at Opera House Manchester till 24 May.

Get your tickets online here >>