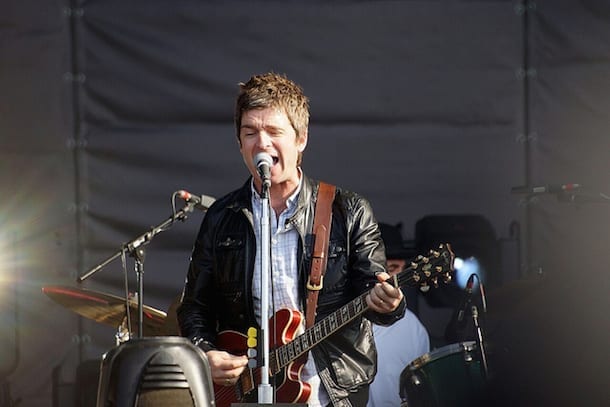 It may well be a ‘theme park for lunatics’, but that will always draw in the best crowds. And Noel knows it. (Picture courtesy of Paul Padshewscky, via Flickr)

A fleeting glance at the headlines recently may have tempted you into feeling a little bit disheartened, as one of Manchester’s favourite sons Noel Gallagher told the Manchester Evening News how he ‘didn’t ‘recognise Manchester anymore’. Talking to the M.E.N during the launch week of his latest solo record, the Oasis legend talked frankly and slightly disappointedly about an old walk he used to do around the city centre when living on Whitworth Street in his twenties.

He told the paper: “I used to live on Whitworth Street and on a Saturday I would do this specific route, walk around the shops to see my mates that worked at the shops, and then walk back to the flat.

“That Saturday 18 months ago when I was up there, I thought, ‘Do you know what? I’m going to do that walk again because I haven’t done it since I was in my 20s’.

“At every turn, the landmarks of my life had gone. And I was shocked. Pubs that used to be there were health clubs and restaurants, and some of the buildings aren’t there. And there’s a whole other part of the city built after the IRA bomb.

“It was like, ******* hell, I kinda don’t recognise it any more. When I got back to London my wife asked why I was so sad about it, and I told her it was because I would have liked to do that walk with my sons and shown them where I played for the first time, or this was the Hacienda.”

Noel also seemingly pulled no punches when describing an average night out in Manchester as something akin to a ‘Disneyland for lunatics’.

Now, we all know Noel is fairly notorious for his outspoken opinions, and this isn’t the first time he’s talked through echoes of broken nostalgia about his hometown. But we don’t think anybody should get too down in the dumps about his disillusion. Manchester has grown enormously in the last 20 years. It is, in fact, growing faster than any other city in the country. The Northern Quarter is an antisocial hangout turned Hollywood hotbed.

Salford Quays is now arguably the media capital of Europe. Whitworth Street itself is only a stones throw from the new multi-million pound, state-of-the-art HOME complex, which looks to become an unrivalled culture-magnet when it opens in the Spring. Things change, and the city has fought back against a bomb to become one of the most investable and exciting places on the planet, bar none. This sort of development will always involve change, and it’s easy to sympathise with Mr Gallagher about seeing old buildings and favourite pubs disappear. We all go through that. But the city is doing a lot to reinvent its architecture and celebrate it too. You only have to look towards Albert Hall for evidence of that. Walk through Manchester and what you actually see is a unique harmony of old and new, and a resurgent spirit that epitomises the city.

Noel also told the M.E.N that he still had the city in his heart, and that despite the changes the city has made, there was still an unbreakable connection to the people. Ask any Mancunian and they’ll tell you the best thing about their city is the people in it. The people…and the nightlife that is. It is unlikely that anyone reading this needs to be convinced that Manchester knows how enjoy itself. And yesterday Noel offered further proof in a blog for the Huffington Post, where he was writing about his current arena tour.

He said: “Manchester you were the bollocks.

“I couldn’t split the gigs between you and Glasgow and that’s the highest compliment I can pay any set of fans. Very special…if Carlsberg did Monday’s and all that!

“Which brings me to Tuesday…London. The 02…on a Tuesday…in London. It was probably great…it usually is. But coming after Glasgow/Manchester I’m afraid a Tuesday night in London isn’t gonna cut it somehow. There’s not much more to say about it really. HIT THE NORTH!!!!!”

So there you have. Proof, if needed, that Noel Gallagher still feels well and truly Supersonic about Manchester. It may be a Disneyland for lunatics, but come on, Noel, you wouldn’t have it any other way.