Cult Sauce – not just another night out at the cinema 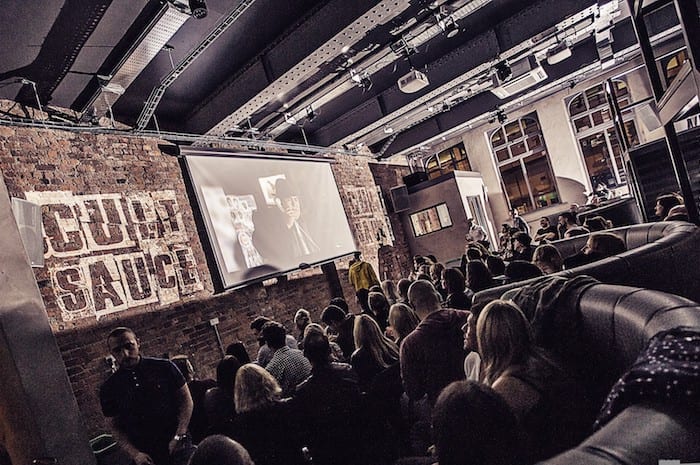 It’s an exciting time if you’re a fan of film and from Manchester. Not only are we home to, er, HOME, the £25m arts complex and cultural jewel of the north, but we’re also hosts of an annual international film festival which proudly features some of the best up-and-coming talent from across the cinematic landscape.

When we’re not showcasing the biggest names in cinema, we’re busy championing independent film and theatre. But every once in a while we like to kick it up a notch and host something that’s so left-field and so fantastical that you can’t help but sit up and take notice.

So you could imagine my delight when I discovered that Manchester held its very own cult film night. It’s called Cult Sauce and it’s a retro pop-up cinema with a few added twists and surprises along the way.

After constantly being vetoed by his fiancée on film nights – she thinks he’s a dinosaur – Michael Gulliver set out to create an event that could replicate that old school cinema feel and attract like-minded film lovers. Unlike most cinemas, however, Cult Sauce doesn’t  have a permanent home. They prefer working with established venues across the city, with the likes of Noho, Texture and Joshua Brooks already playing the roles of host.

“We like the ability to pop up wherever fits best and disappear afterwards!” says Michael. “A bit like Deadpool in the comics.”

If you think Cult Sauce is just another night out at the cinema, however, you’d be sorely mistaken as you’ll soon discover no two events are alike – even down to the food they serve.

“We show cult classic movie trailers and usually stop for a 20 minute interval at half time,” he says. “We even have a retro ‘go get some candy advert’ to introduce the break.”

It’s at this point that members of the audience are invited to sample from the themed menu which, as always, is catered for by local street food vendors. Dirty Food Revolution and Dim Sum Su are just two restaurants which have cooked up some incredible street food at Cult Sauce events, while they’ve even made sure to include a good range of vegetarian options, too. 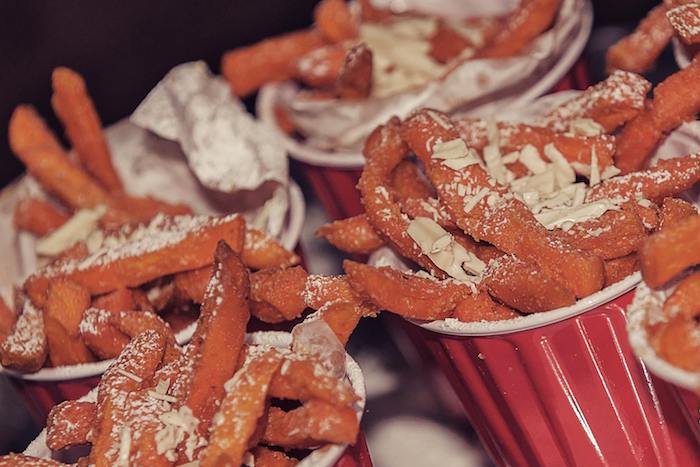 Typically a film event would be around three and a half hours long with tickets ranging in price from £8 to £13.

One of the most unusual things about Cult Sauce is that they continually look to promote talent throughout the city – in particular, artists.

“We take pride in showcasing local Manchester artists before each of our events,” says Michael. “We collaborate with local and established artists to display a range of alternative movie artwork and have a strong relationship with a number of established artists.”

Despite featuring a whole host of cult favourites already, including such 80s classics as Alien and Beetlejuice, the man behind Cult Sauce refused to let slip any upcoming plans. “I could tell you but then I’d have to kill you!” he told me. I’m still not sure if he was joking.

What he did say, however, was that they are working on something big and that cult film fans would have to wait until the new year for their 2017 schedule to be released.

It’s not just on the film front where they’re looking to expand with an appearance at Park Life on the cards as well as the launch of their very own range of Cult Sauce movie merchandise on their website. For this they teamed up with a number of local artists to create a range of cult classic inspired lines that any self proclaimed retro movie geek would love.

“We aspire to ensure each Cult Sauce event has an element of something fresh and new, while honouring the artistry of each movie we show and keeping the values of an old school cinema,” says Michael. “It offers people an opportunity for some good clean old-fashioned fun.”

If you’re an artist and you want to get involved, or just love retro films, then make sure to give Cult Sauce a follow on Twitter or visit cultsauce.bigcartel.com for the latest updates from around the city.