Corrie spoilers: Sinead’s secret revealed and a Halloween skeleton in the closet 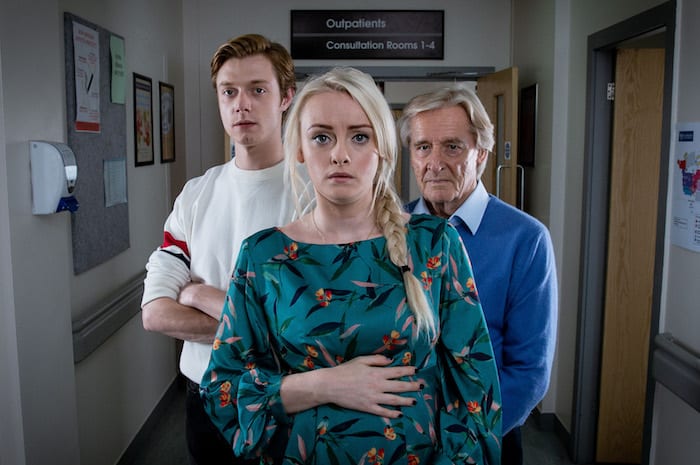 Secrets and lies come tumbling into the open in another thrilling week on Coronation Street.

And for the first time, the soap will air an episode entirely dedicated to the Barlow family as poor Sinead’s secret health dilemma is revealed to her unsuspecting new husband Daniel.

Here we take a look at what soap fans can expect in the coming week.

Sinead (Katie McGlynn) collapses and is rushed to hospital, but when Daniel (Rob Mallard) arrives he is stunned to find out the truth about Sinead’s illness – that she has been hiding her cancer diagnosis – and that Ken (William Roache) knew all about it.

He is further horrified when Sinead reveals she has refused treatment as it would mean losing their baby.

Devastated, and struggling to deal with the news, Daniel heads back to number 1 to have it out with his dad but is intercepted by Peter (Chris Gascoyne) in the backyard.  Daniel vents his rage at Ken, not realising that he can hear what they are saying in what are set to be emotional scenes.

Steve discovers a skeleton in the closet

Steve (Simon Gregson) is left incredulous when wife Tracy (Kate Ford) admits she thought he was having an affair with Abi (Sally Carman), so in a bid for revenge sabotaged Michelle’s car hoping Abi would lose her job, but now she could lose her kids as well. Consumed by guilt, Tracy heads to the police station.

Peter’s still got feelings for Carla

After finishing the nightwear for the competition, Carla (Alison King) and the factory staff descend on the Rovers.  Peter watches on in admiration.

Liz (Bev Callard) and Carla then get the girls involved in the pub’s Halloween-themed charity night.

Can Ali live with his guilty secret?

Ronan’s mother Patti (Anne Kent) approaches Ali (James Burrows) and asks him to talk her through her son’s final moments. Struggling to keep his emotions in check, Ali lies telling her he did everything he could to save her son.

Ali breaks down and tells his mum Michelle (Kym Marsh) he can’t live with the guilt.  But what will he do next?

Carla still has feelings for Peter

Carla demands to know what Peter is up to after she finds out about his meeting with Nigel Steadman, a competitor of Underworld.  He lies to Carla, but then explains how she’s made him feel superfluous to requirements.  She assures him they make a good team but need to learn to trust each other.

She later confides in Johnny (Richard Hawley) that despite everything he’s done, she’s still in love with Peter.

When will she ever learn?