Corrie spoilers: all the drama coming up in the week ahead on Coronation Street 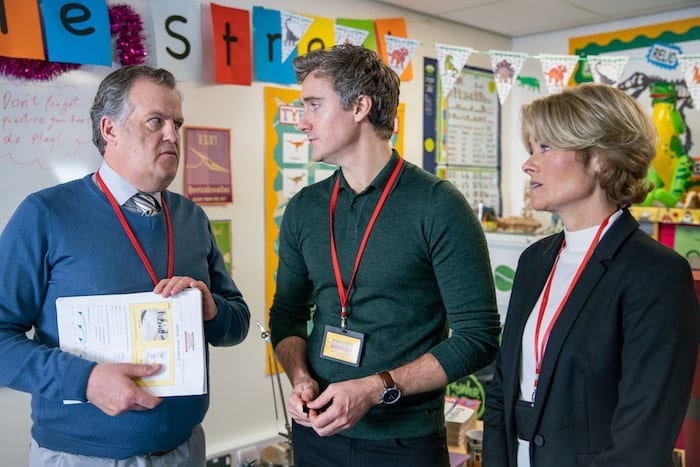 There’s a blast from the past, angry confrontations and hair-brained schemes ahead in next week’s Coronation Street.

Teacher Brian continues to struggle at work with bullying deputy head Phil, while Daniel struggles to cope with Sinead’s revelations that she has stopped chemotherapy to protect their unborn child.

Here’s your episode-by-episode guide to the week ahead on Britain’s most famous TV street.

Brian pays the price for overdoing it

Teacher Brian offers Liam a role in the nativity but after watching the dress rehearsal, Phil orders Brian to rewrite it by the morning. Overworked and clearly stressed, Brian goes to make a start but suddenly he faints, hitting his head on the table as he collapses.

Liam finds Brian unconscious in the staff room and Phil helps Brian to his feet. Phil taunts Brian that he appears to be stressed and that teaching is not for him, but Brian assures him he is committed. Cathy’s horrified to hear from Maria about Brian’s collapse but Brian plays it down.

Daniel furiously blames Steff while Sinead reveals Steff only has days to live. Ken offers to give them a lift to the hospital meanwhile, desperate to help Sinead, Beth finds a specialist cancer clinic in Germany but realises it would cost thousands. At the hospital, Daniel tells Ken the truth about Sinead as she is told the cancer has spread and she needs to start chemo as soon as possible. Sinead tells Beth the news.

As Carla takes money from the safe, Beth clocks the combination, her mind whirling. Beth eyes up the money in the safe but is interrupted by Kirk, leaving him suspicious.

Sinead attends chemo with Daniel, telling him she is sorry and revealing that Ken has secretly being paying for her complementary treatment. Meanwhile, Beth suggests that Chesney steals the takings from work to fund Sinead’s treatment, making out he was mugged.

Blast from the past

Liz slips off from the pub for an hour leaving Jenny immediately suspicious that she could be heading off to meet Johnny.  But Liz is actually meeting up with ex Mike.  Jenny is relieved to see the pair kissing outside the cab office.

Michelle is barking up the wrong tree

Robert tells Michelle that he has a secured a last minute place on a training course but secretly joins Kate for an initial consultation at the fertility clinic.

Meanwhile the lights blow out at the bistro and so Ryan phones the training college only to learn Robert isn’t enrolled. Michelle confides in Carla that her and Robert are at odds over his desire for a baby and now he is lying to her.

Michelle demands to know where Robert’s been. He tells her he just needed time alone to think but Robert hates lying to her. When Michelle enquires about counselling for a matter related to Ruairi, Toyah offers to recommend a colleague.

After Phil drips poison in Cathy’s ear, she summons Brian home from work, confronting him with the caffeine pills she found in his coat. The doctor diagnoses Brian with heart palpitations and after being bolstered by Cathy, Brian tells the headmistress that Phil is making his life a misery.

Later Phil makes a heartfelt apology to Brian after being summoned to the headmistresses office, and Brian is confident things will now improve. But is all as it seems?

As Robert and Kate arrive for their appointment, Robert spots Michelle leaving her counselling session and panicking, bundles Kate in to a cupboard.

After their session, Robert announces to Kate that he wishes to go ahead with their plan and they both know they need to tell Michelle and Rana.

Kate tells Rana they need to talk but before Robert can talk to Michelle, Michelle reveals all about her counselling session and that she will consider trying for a baby, leaving Robert to forget about his commitment to Kate.