Next time you’re walking round the city centre with nothing better to do, take a peek through the windows of our eateries. You may notice something different. Instead of people eating at separate tables, you will often see rows of diners sitting shoulder to shoulder.

Meeting new people this way might not have been the norm a few years back, but this communal form of dining is catching on fast. Table sharing, the practice of seating individuals who may not know each other at a single restaurant table, has been common in Asian cultures from the dawn of gastronomy.

It’s so widespread in China that there’s even a mathematical probability named after it – the Chinese restaurant process. And even in Japan, where sharing a meal at home with a friend is uncommon, table sharing with complete strangers when they sit down to eat in public is a routine occurrence.

Communal dining spread slowly from Asia to the rest of the world, really picking up, as you might expect, in the culture capital of the world – New York. In the 1990’s trendy restaurants started to experiment. They knew that communal bar seating worked. It was helpful for all those single diners.

But what if they moved it away from the bar and into the general seating area? The younger generation loved it. It was laid back, less formal and more social. Asian-influenced restaurants led the way. They were perfectly placed to transport communal dining culture from Asia to the west.

But why has it taken so long to catch on in this country? Like the Japanese, we live on a small, densely populated island which has given rise to certain rules of behaviour to help us all get along.

But we’re also anti-social, uptight, and perpetually anxious. What’s more nerve-wracking than meeting new people? Meeting new people while you’re both trying to scoff down a bowl of ramen.

Have you ever watched someone eat? At best it’s off-putting and at worst it’s stomach churning. We do strange things when we dine. Our faces contort in odd rhythmic waves, our mouths make odd noises, gurgles and churns, and sometimes our faces, and our clothes get covered in sauces and soups. And some people are particularly messy eaters.

We are not like our American cousins. We are not as laid back, as sociable or as confident as them. Or should I say were? Communal dining shouldn’t work in this country but it does.

Maybe the times they are a-changin’? To celebrate our new found ability to eat with undignified and unbridled mirth while socialising merrily with our fellow diners, here are some places to try the communal dining experience in Manchester. 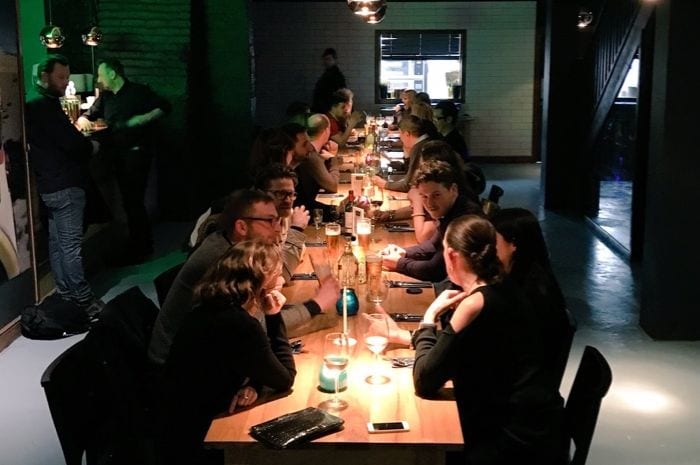 Get friendly with your neighbour while enjoying a fixed main course on a 40-foot long communal table. Bakerie Long Table Dining is a monthly event which specialises in dishes of hearty stews with hunks of freshly baked bread and seasonal dishes. And even if you can’t quite make it to their place on Lever Street, they now deliver so you can invite some friends around and do your socialising at home.
bakeriemcr.com

Take a taste tour around East Asia at Tampopo. Enjoy an eclectic mix of street food the proper way— in a sociable, neighbourly atmosphere. And their regular Supper Club evening celebrates their favourite dishes from one region including five courses and welcome drink. With three sites around Manchester, there really is no excuse not to.
www.tampopo.co.uk

Another place for street food, this time Indian. Bundobust is a Manchester staple with even the New York Times serving up rave reviews. This place has no airs and graces, even serving up its award winning food in paper containers.
www.bundobust.com/Manchester

Located inside the infamous Printworks, Bierkeller offers a Bavarian inspired food menu to enjoy communally. You’ll find yoursef washing it down with a/several beer stein/s and dancing on the tables.
thebierkeller.com/manchester

Kosmonaut is just a fun place to be whether you’re eating or not. Come for the art, the music, and the film screenings and then settle down on the long dining table with a beer and some fish and chips from the awesomely named Hip Hop Chip Shop.
kosmonaut.co

Kro Bar has been doing the communal dining thing since 2005. This Danish village pub on Oxford Road specialises in good food, good beer and a warm welcome. Their mainly student clientele pack the place nightly, making friends and treating the place like an extension of the student union.
kro.co.uk