We discover from the menu that the Pudding in Beef And Pudding isn't a sweet pudding... 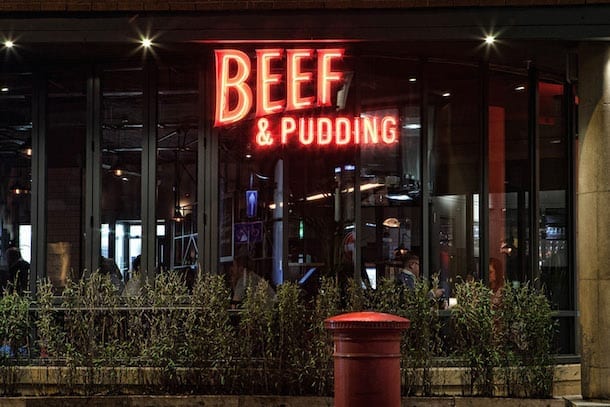 A rainy Monday evening in Manchester. How unusual. Looking for comfort food we head for Beef And Pudding on the corner of Fountain Street and Booth Street. It’s where The Crown used to be.

Opening in April this year, Beef & Pudding is the latest edition to the New Moon Pub Company and is the first of Paul Newman and David Mooney’s ‘Urban’ offerings in the city centre. 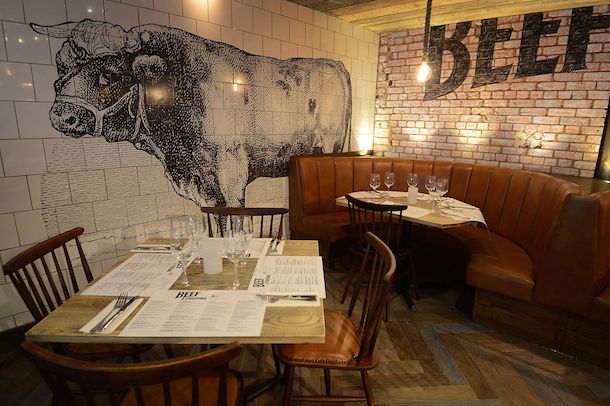 We discover from the menu that the Pudding in Beef And Pudding isn’t a sweet pudding but a savoury pudding. In fact, it’s a baked suet pudding, filled with prime British beef. But we love puddings whether they’re sweet or savoury (apart from bread and butter pudding), so weren’t too disappointed.

After a quick consultation, my companion and I agree the following strategy: one of us will try the beef and the other will try the pudding.

But before the main course we have a starter. I have a prawn cocktail served in a half pint glass with some delicious homemade-tasting brown bread and butter whilst my companion chooses rare breed bacon ribs in black treacle & chilli glaze served with loads of napkins. Everything is delicious (apart from the napkins). 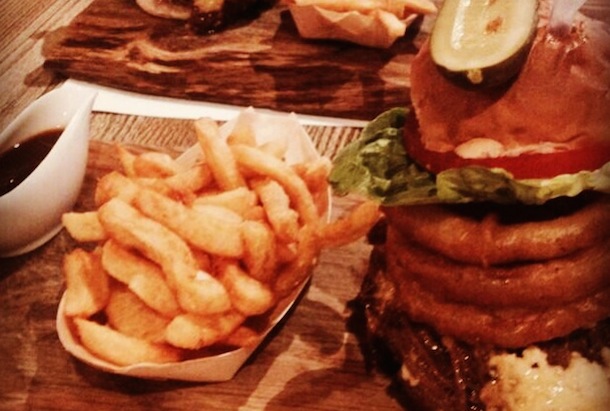 Now to the beef and pudding. The beef comes in the form of the The Beefham Tower (£15.95), a house-made burger which consists of sweet chilli beef brisket, horseradish, suet pudding & mushy peas, gravy, onion rings, proper chips, brioche bun, cheese and ‘Howling at the Moon’ sauce. It’s not quite as tall as the real Beetham Tower but looks and tastes much nicer.

The pudding (£14.95) is baked not steamed so it’s crispy and brown rather than white and anaemic. It’s full of beef and served with mash, black peas and stockpot gravy. (That’s not a misprint. It’s stockpot gravy not Stockport gravy, which is something completely different).

Then on to more pudding-this time of the sweet variety. A black cherry Bakewell pie (not a pudding but it’ll do) with cream. My companion opted for ice cream-Mrs Dowson’s and pronounced it excellent. All desserts cost £5.95. 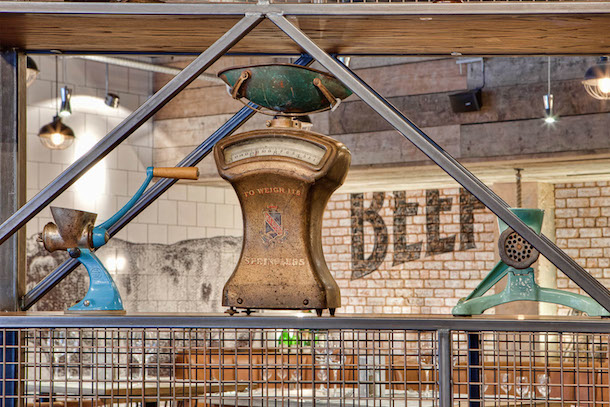 It’s hard to think of anything negative to say about this place so we won’t. The food is gastropubby and the kind your granny used to make (or would have made if she had been to chef school) and features traditional local favourites such as black pudding, fish and chips, and sausage and mash as well as more exotic dishes such as tempura monkfish cheeks and teriyaki chicken noodle breast salad

The food is tasty-they even make tripe taste good- and the portions are generous. In fact, my companion and I both have healthy appetites but both struggled to finish our meals. The icing on the pudding are the staff who were uniformly courteous and attentive.

And by the way, they never take any more than £10.50 on any bottle of wine rather than the usual 70% so the wines are excellent value.

In short, we loved Beef And Pudding and we think you will, too. 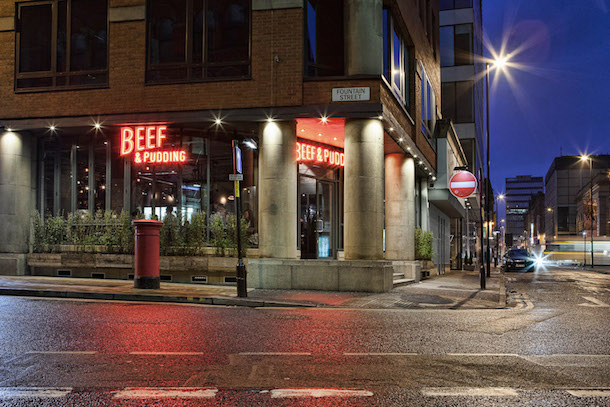 Go. You won’t be disappointed.