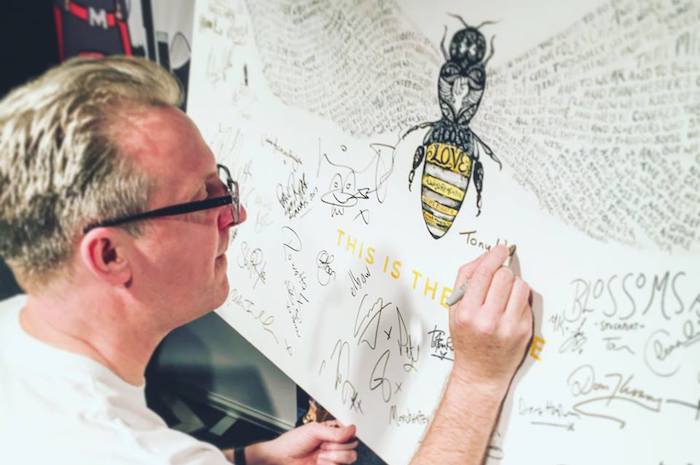 A painting by Manchester artist Amy Coney which has been signed by a swarm of celebrities goes up for auction on eBay at 6pm today to raise funds for Forever Manchester and the We Love Manchester Emergency Fund.

You have until Thursday 10th August to bid on the artwork which has been signed by some of Manchester’s most famous faces including Bez, the Happy Mondays, Clint Boon, Peter Hook, Rowetta and The Charlatans.

The painting, a giant Manchester bee, has been on a summer tour of its own to a number of festivals where it attracted even more signatures from stars such as The Pixies, Two Door Cinema Club and Goldfrapp.

The auction, which was originally set to go ahead in June, was postponed to give more celebrities chance to sign.

“Initially it was going to be just Manchester icons,” says Amy, “but Manchester is such an inclusive city, hosting some of the most incredible and talented people as well as growing its own, it made sense to make it open to everyone who wants to support the cause.” 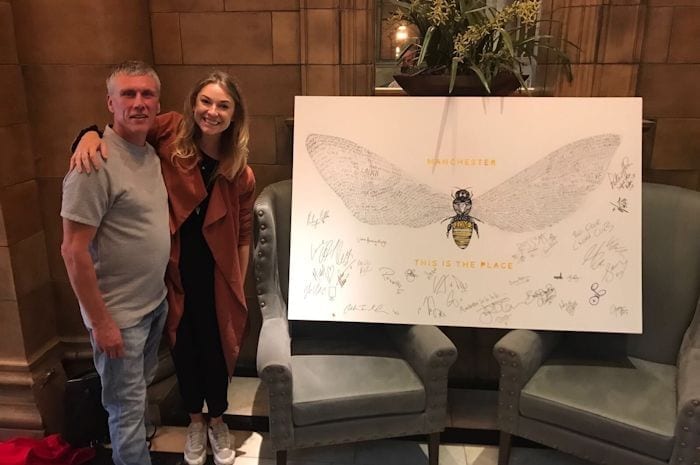 Filling the wings of the bee design are words from local poet Tony Walsh’s verse This Is The Place which he read at the memorial event the evening after the tragic 22 May terror attack on Manchester Arena, in which 22 people died.

“Poetry and art coming together to spread a positive message in the face of all that happened I think has been more poignant than anything,” continued Amy, who created the giant bee artwork in an impressive ten-hour painting session.

“Now that more people are supporting and giving up their time to sign and spread the word the #WeStandTogether statement is stronger than ever.”

Tony and Amy have both signed the painting themselves, adding to an ever-growing list which includes The 1975, Anthony Crolla, New Order, Alt-J, Manic Street Preachers, Editors and Mercury Prize-nominated Blossoms.

Amy added: “I can’t believe the support that we have been given by this wonderful city, and so many of its artists, footballers, actors and legends.

“We are all just so proud to support this amazing cause, which was set up to help victims of the horrendous events at Manchester Arena on 22 May.”

If you’re not lucky enough to get your hands on the painting, prints will be available after the auction, with proceeds also going to Forever Manchester.

Visit the website to find out more about the painting and the link to the auction. The Bee Love shop can be found here.