I’m not usually big on international or national days – there are too many truly random ones – but this feels like something I can really get behind. Two days of drinking then a day in your pants recovering.

I started the quest on Thursday by drinking loads of IPAs. I was given the opportunity to get stuck into my favourite kind of beer by Malmaison and BrewDog at a beer tasting evening in the hotel’s bar.

Before heading to the Malmaison I did what any self-respecting beer drinker would do. I had a couple of pints. Guinness to be exact. Just to get myself going. I really didn’t need to.

On arrival, we were escorted to an intimate table seated for four with BrewDog’s craft beer expert Patrick. We got stuck in. 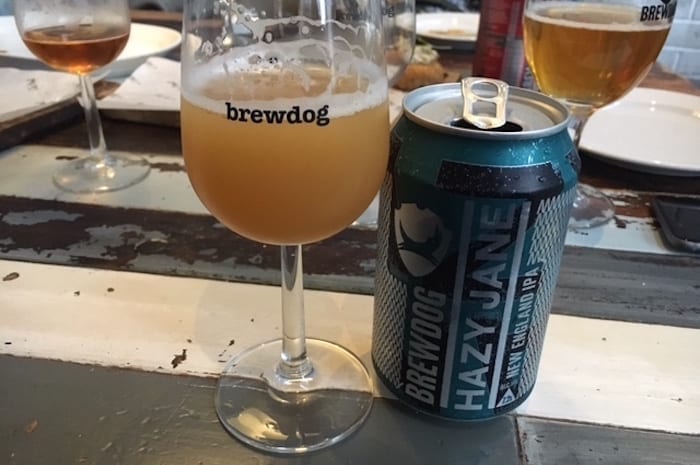 The first beer served was the brewery’s flagship and most popular tipple, Punk IPA. Now I’ve had a few Punk IPAs in my time. I know what to expect and I know how strong it is. At 5.6%, it’s definitely not a session ale. But what better place to start? I was slightly dismayed yet excited when Pat explained we were starting at the bottom, heading up in terms of strength.

IPA stands for India Pale Ale. Despite only 5% of the beer drinking population loving craft ales, IPAs are seemingly everywhere. And Punk epitomises this. You can get it in Tesco, you can even get it at petrol stations. It’s hoppy, bitter and clear – like any good IPA should be – and is a real gateway beer into the IPA scene.

Next up was Elvis Juice. BrewDog has never been shy of controversy and this is the latest in a line of headlines about the brand. Basically, Elvis Presley’s estate aren’t happy with the name. This has led to James and Martin actually both legally changing their names to Elvis – although they stopped short of asking all their staff to do the same (something that Pat tells us was discussed). The name stays for now.

I’ve avoided Elvis Juice a couple of times in the supermarket, simply because of its strength at 6.5%. So, what I didn’t know is that it’s actually a grapefruit infused IPA. This makes it even more bitter, but Pat informed us this is balanced with notes of caramel. I swilled, I sniffed, I sipped. It’s delicious. Pat told us it’s great at summer BBQs, where you end up getting really smashed. I agreed while munching on a mini-burger. Things were definitely heading in the right direction.

Next up was Hazy Jane. A cheeky number at 7.2% this is a beer that flies in the face of what it means to be an IPA. It’s fruity and it’s cloudy. This isn’t BrewDog going completely off-piste. It’s their version of a New England IPA. Something that’s really trending this year.

It was amazing. I’ve got two cans in my fridge that new best mate Pat gave me. I’m no longer scared of the ABV.

I thought I was pretty knowledgeable about beer, but I was learning loads.

The main thing I took away is that when it comes to IPAs, the fresher the better. This is why you’ll struggle to find BrewDog on tap and it’s all about the cans for them. Hazy Jane has a 30-day shelf-life, so is as fresh as it gets. The cans we were draining were seven days old.

The final beer at the official tasting was Electric India. This is one of their seasonal beers. Basically, beers designed to be drunk with the perfect weather. This one’s intended for long lazy summer nights, not cold wet Mancunian August evenings, but you can’t have everything. It’s also 5.2% so a good one to finish on, although not in line with Patrick’s initial sell of increasing the danger and ABV as we went.

He redeemed himself with an offer of a trip to the BrewDog bar on Peter Street, where we sampled another 7.2% IPA – this time it was the amply named Jack Hammer.

We then finished in the only way to wrap up the evening with the 10% stout Cocoa Psycho. The official tasting was over, things were getting a bit blurry, so my knowledge of these two is a little sketchy. I can tell you that Friday morning wasn’t great.

I came away with my main boxes ticked. I was pissed, I tried some new beers, I had some new beers in my bag and I’m now the proud owner of BrewDog playing cards and a keyring.

I think my only disappointment was finding out that the Malmaison only stocks Punk. But there’s always Peter Street. And 10% ABV.