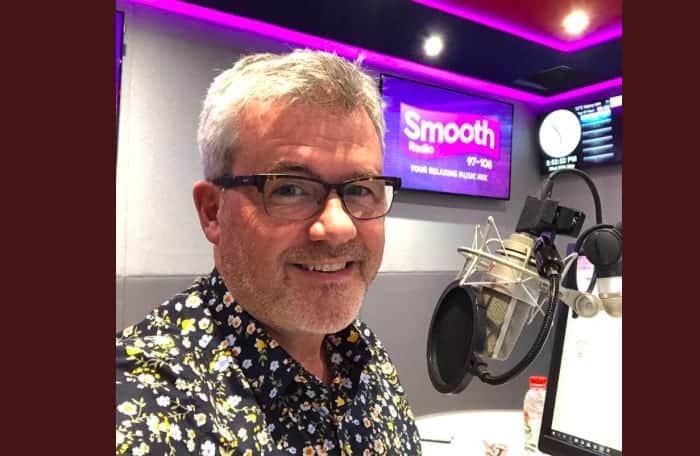 Popular Smooth Radio DJ Carlos has left the station after 12 years, amid the latest shake-up of radio programming in the north west.

Smooth has announced that all its local Drive time shows across the UK have been axed – in favour of one new national afternoon show to be hosted by Angie Greaves from September.

It has meant that long-standing Smooth presenter Carlos, aka Carl Emms, left the station on Friday after five years on Drive, and 12 years at the station.

Fans were gutted to hear dad-of-two Carlos bid his final farewell on air last week, and he has thanked fans for their well-wishes.  He says he hopes to have news soon of his next move in broadcasting.

He said: “I’m so very proud of my time at Smooth – 12 years is almost a third of my career. From when I was starting my career as a 15 year old in Wiltshire I’d always wanted to work in Manchester. Inspired by listening to Piccadilly on my frequent trips to the area with my late parents I was fond of the city from an early age. I almost joined Key 103 in the early 90s before taking a position at BRMB in Birmingham instead.

“I’ll always treasure my memories of my time working in the city and a soft spot for the many Mancunians who made my time so enjoyable.”

Carlos has wished his successor Angie Greaves all the best for her new national show, The Smooth Drive Home, which will air from 2nd September. 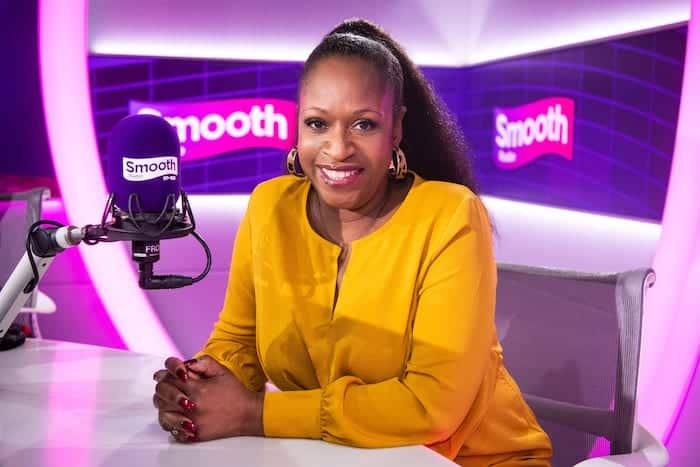 Angie said:”To be approached to present The Smooth Drive Home, especially as the show launches across the nation, is an absolute honour for me. I am really looking forward to joining Smooth, which is going from strength-to-strength, at such an important time in the station’s history and I can’t wait to get started.”

Fans took to social media to express their sadness at Carlos’ departure, with many saying Smooth “won’t be the same” without his dulcet tones. 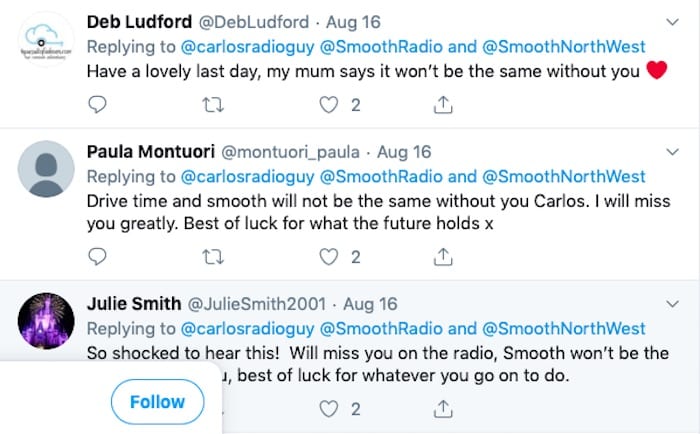 The changes at Smooth are part of a new nationwide strategy across the Global Group which also owns Capital Radio and Hits Radio.

Fans were left up in arms across the north west in June when popular Heart breakfast duo Joel Ross and Lorna Bancroft were axed – in favour of a new national flagship show co-presented by Jamie Theakston and Amanda Holden from London.

Over at Capital, Manchester’s breakfast show team of Rob Ellis, Nigel Clucas and Rachel Burke-Davies were also moved in April to make way for a national show hosted by Roman Kemp – but fans were delighted when it was announced they would not be leaving the station, instead moving to host the new north west Drive show.

Now, Smooth bosses have taken the decision NOT to axe its local breakfast shows, but instead have turned their attention to the Drive show to go nationwide instead.

Ashley Tabor OBE, Founder and Executive President at Global, said: “At Global, we pride ourselves on doing the right thing for the long term, no matter what.

“After further consideration and listening to more feedback, both internal and external, we came to the conclusion that keeping Breakfast local, and taking Drive national, is actually the right fit for Smooth.

“Yes it’s a change in strategy for Smooth, but we believe it’s the right one. We are absolutely delighted to welcome one of the nation’s most successful AC radio presenters, Angie Greaves, to host the brand-new show.”

Sam Jackson, Managing Editor of Smooth Radio, said: “The national breakfast marketplace is ever more competitive, with lots of new shows competing for listeners’ time and attention. We believe there’s a real opportunity to “own” the Drive slot on Smooth, where audiences across the UK are currently underserved, as well as offer a fantastic national show that firmly rivals what’s on offer elsewhere.

“What’s more, given Angie’s proven success on a variety of stations over the last two decades, it makes complete sense to take The Smooth Drive Home nationwide. We are delighted to welcome Angie to Smooth.”