Burger, lobster or lobster roll with fries and salad. 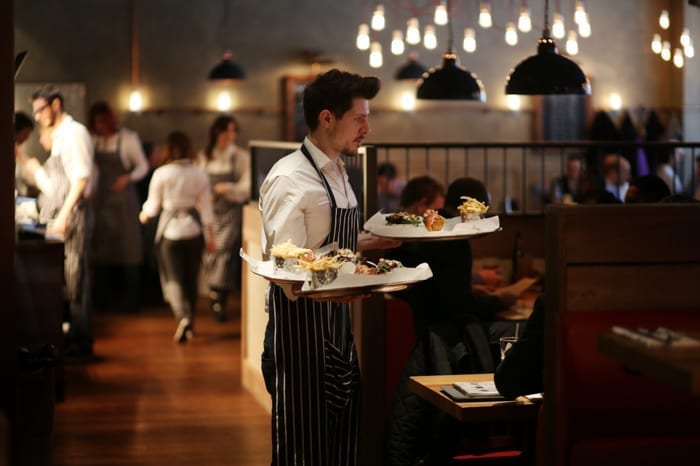 ‘Is the clamour for crustacean a sign of how far the city’s dining scene has come or a growth in visitor numbers?’

L’Entrecote didn’t hit the numbers. Why not? The price was too high. The concept was too odd. Manchester doesn’t have the demand. It would work in London, but not up here. All popular schools of thought, along with the fact that the food was just OK. But Manchester’s restaurant scene was ready for take-off. OK wasn’t good enough.

Fast forward 24 months and nobody seems to be saying anything of the sort about Burger & Lobster. The schtick is simple. Burger, lobster or lobster roll with fries and salad. All priced at £20.

Is the clamour for crustacean a sign of how far the city’s dining scene has come or a growth in visitor numbers. Or are we just falling in love with something new, as the city often does?

Restaurants like Hawksmoor – a brand that one national food critic said would never work in the regions either – have bridged the gap, but the owners have always said that their restaurant would be judged after six months, when it isn’t new anymore.

Well, that’s the end of August and, judging by a recent visit, Manchester’s diners are still well and truly behind it.

Fundamentally, Burger & Lobster hasn’t done much different. But the defining factor seems to be the food. The social media praise and excitement simply wasn’t there for L’Entrecote, largely because the food was just OK and the service could be up and down. Opening my own wine in a restaurant because the waitress didn’t know how to use a bottle opener was a new one on me.

More burgers though? I’d be interested to see the burger/lobster stats after the first year of operation.

Like Hawksmoor before them, they’ve gone for some bespoke Manchester touches – a huge neon light above the kitchen reprises the cover of Joy Division’s ‘Unknown Pleasures.’ I wish someone would tell London that we don’t need to have Manchester stamped on something in order to want to use it, now do we?

With L’Entrecote, they dumped a high footfall-reliant concept into the city with no personalisation at all. Maybe another reason why the majority of Mancunians didn’t really take to it.

At Burger & Lobster, as well as the £20 standard fare, you can pick your own giant lobster out of one of their in-house tanks for a price that can range from £45 to £350.

Will that be too niche for the city? In their 11 other restaurants across London and the US, they sell 26,000 of the blighters every week.

The introduction of Burger & Lobster is definitely a step up for the city centre’s restaurant offering – although there’ll always be the argument about which end actually gets more added value out of the relationship.

It will also spark an interesting head-to head with Steak & Lobster, which has a restaurant in the nearby Radisson Edwardian on Peter Street, serving one or the other with unlimited fries and salad for £20.

So out of nowhere, Manchester currently finds itself locked in ‘lobster wars’. How very upmarket.

Room for both? Following the L’Entercote experience, the city might be happy enough to have the just one, and it should provide an interesting sideshow to the ongoing burger battle.

Progress? Most definitely. And tasty progress at that.