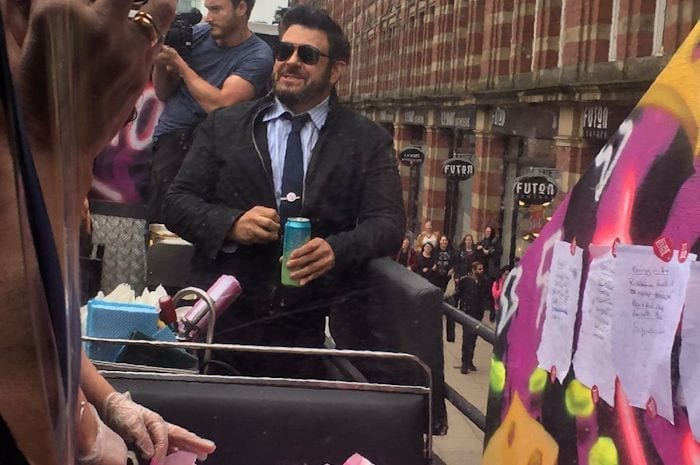 The sauce market is big business. The immovable Heinz Ketchup and Hellman’s Mayonnaise are staples in most households. If you’re doing it properly, you’ll also have the likes of Sriracha and Lea & Perrins Worcestershire sauce in your cupboard at all times.

Meat Lust, a street-food inspired sauce company, are hoping to make their way into your affections with a campaign fronted by American former food-guzzling sensation, Adam Richman of Man vs Food fame.

The bus isn’t simply a means of transport. It’s home to a top deck BBQ operated by the kings of meat-based puns, Beastro. The Spinningfields eatery will be serving up first-class finger food between stops, accompanied by beers from Shindigger Brewing Co, Tickety Brew and Brew Dog.

For £30 you can take a ride to sauce city, but is there more to this experience than eating and drinking on a bus? We took a ride.

For its inaugural journey, Adam Richman hopped on board. Somewhat elusive and rather more retiring than one would expect, he did make a point of showing his affection for the local independents and their products.

“What do I love most about Manchester? The people, without question.” Said Adam.

“The people. Second honourable mention would be chicken and curry sauce on chips.

“I’m really falling in love with this city and I cannot wait to come back when I don’t have to work. Just enjoy it.

“I didn’t know there even know there was a Manchester food scene. I’m seeing craftsmanship that could stand up in any city, culinary acumen that no chef could challenge and real variety.”

Portion wise, there’s plenty of bang for your buck. After meaty tacos from Beastro, we tucked into a tasty mini-katsu chicken sandwich from Northern Soul – with three more food stops to go.

With even more food and drink consumed than on a 43 night bus, you won’t be leaving this bus hungry – or sober if you follow the ‘one beer per stop’ suggestion.

The restaurants involved have all put together an off-menu dish made with their chosen Meat Lust sauce. That means a whole load of saucy pizzas, sandwiches and hot dogs.

Beastro are doing what they do best – pulling off top notch food in the most demanding of situations. In this case, cooking on a double decker bus, jolting about through rush hour and packed with drunken eaters all wanting a picture. All in a day’s work.

The tour is undeniably good fun and represents strong value for money. But the real question is, would you grab a bottle of Meat Lust on your weekly shop?

Despite the competition, these sauces hold their own, with the sweet, green chilli and katsu curry sauce making their way into my cupboard. The branding is strong and simple and the flavours are refined yet robust enough to compliment without overpowering the dishes.

The Sauce and the City Tour will run for ten days from July 20th, starting at B.eat Street and stopping off at places like Northern Soul Grilled Cheese, Crazy Pedro’s and Brewdog.