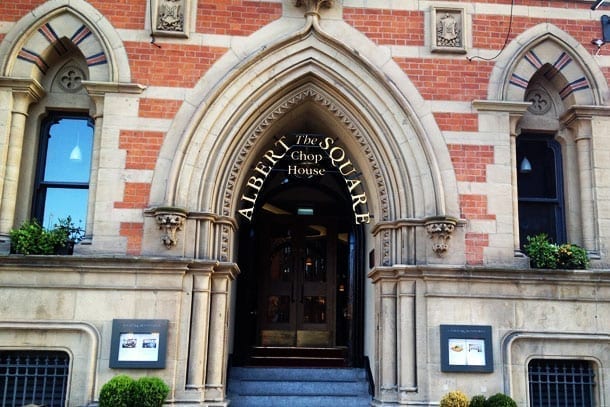 It was snowing. Somehow wrong this side of Christmas. In December, fluttering snowdrops would be magical, in January, they’re just annoying, meaning you put on an extra stone just in clothes and there’s not even enough to play in it or stop school.

But it was the perfect climate for us to visit the latest addition to the chop house stable, as you will have seen here before I’m a big fan of both Sam’s and Tom’s.

The Albert Square Chop House is, as you would expect in Albert’s Square. It’s the former Memorial Hall and is a lovely Victorian building.

The inside, however is a departure to the tiled, by-gone decor of the other chop houses, this is light and modern, with an upstairs bar area (where they do a bar menu as well) that could be anything from All Bar One to the Slug and Lettuce. 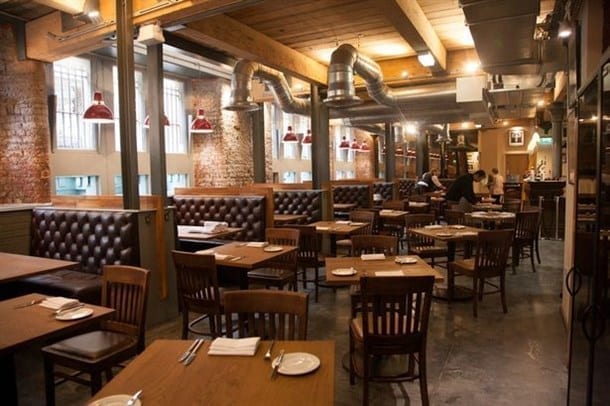 The actual restaurant is down the stairs and this has more flair with open ‘Pompidou’ centre style heating ducts, hanging lamps and cosy booths. There’s also a walk-in wine cellar which the Gay tested out and found it was actually just the size of, well a big Gay really. There are also private function rooms available on two other floors.

We were looked after by the lovely Jose and Jessica who met us with a much-needed warm welcome on this winter eve.

The menu here is different to the other chop houses though you can still order classics such as fish and chips or the corn beef hash if you ask nicely and the staff are very accommodating.

No persuading the boys to do likewise though (to be fair we do tend to share the veggie tasting) because this is a big man’s meat menu.

Starters from £6 include delicacies I’ve not seen elsewhere such as veal tongue, braised oxtail broth, which summarise this British classic but with a twist menu.

Main courses from £12 including a loin of venison I would have ordered if I wasn’t being veggie for the night and there’s the piece de resistance, a steak and chop menu that had the boys salivating.

The Gay ordered the steak tartare and asked to have all the element separately so he could ‘build’ it himself, not being at all fussy or picky. Unfortunately this came in a steel bowl, which made the Ginger’s conviction that it looked like dog food more plausible. But it was delicious, and the Gay mixed in capers, egg and seasoning to just how he likes it, we all had a mouthful and converted Dubai to this rare meat treat.

Dubai (or M27 as he is now known as, because his Christmas holiday seems to be endless), ordered scallops with slow-cooked belly pork. This was a bit of a test as this was our favourite dish at Australasia, and the chop house version passed with flying colours.

“…I had dish envy until I tucked into my veggie homity pie.”

The pork fat had seeped into the scallops giving it a divine taste, these two flavours really go well together and is fast becoming my favourite dish.

Ginger had the pate, which was meaty and hearty, like he and I like it. My creamed artichoke soup was warming, with a delicacy of flavours that was truly scrummy and just the right dish for a cold January night.

M27 and I were washing this down with a cheeky prosecco while the Gay and Ginger were tucking into a warming red that went perfectly with their meaty selection.

Mains came and I had dish envy until I tucked into my veggie homity pie. It made me glad to be a temporary vegetarian as this was gorgeously tangy Mrs Kirkham’s Lancashire cheese with caramelised onions and managed to have both a mash and pastry topping. Delicious, the only comment I would make (and did to Jose) is that this should come with some greens rather than the salad, which felt a little worthy.

The Gay has decided to go a bit ‘bi’ with a meat and fish dish, choosing the halibut which came with chicken wings and cockles. The halibut was cooked to perfection and mingled beautifully with the wings but the Gay felt the cockles were a flavour too far and would have preferred it without them.

Both M27 and Ginger had gone for the chop and steak menu. M27 had the fillet with a peppercorn sauce and said it was the best steak he’s had – even better than Gary Rhodes’ steak in Dubai.

Ginger had the rib of beef chop and I made him order béarnaise sauce as well so I could dip his chips into it before eating them.

The chop looked like the best in caveman fodder with a gratifyingly big bone poking out and was absolutely scrumming, in a meat-eating, dribble-down your mouth kind of way.

It was onto puds which start from £5 and I opted for the warm chocolate soup because it sounded intriguing. It wasn’t what I expected being more of a smashed brownie than anything else – nice but no prizes.

The Gay and M27 both ordered the raspberry soufflé (getting a little worried about M27, girly drinks and soufflé). The Gay, who in a previous life has been a chef, did this because he said raspberries would be really hard to soufflé. But this was superb, and restored my faith in the pudding menu.

Ginger, well he had to really, had the Ginger Parkin, which was tasty and, well gingerish. Being from Yorkshire, I normally have parkin with butter on as that’s the law but it still worked without and was a retro classic.

This is a restaurant that we would go steady with, though we’ll also keep dating her sisters