A Cereal Café set for Manchester? 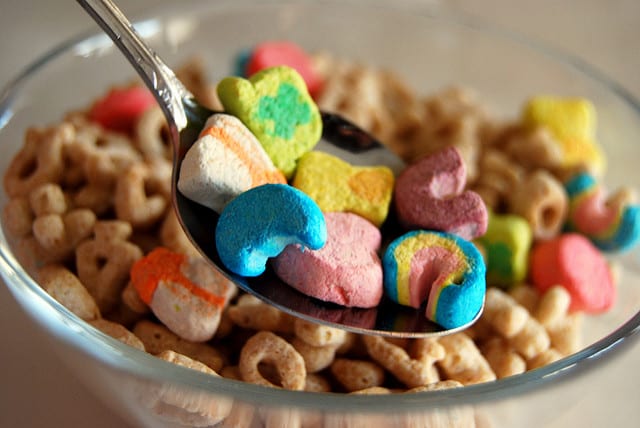 The greater part of me thinks that the @cerealcafemcr Twitter account is a parody – a satire on the Manchester hipster scene and its willingness to latch on to anything that might be seen as cool, irrespective of how ridiculous it is.

…the ‘scene’ is eating a bowl
of cereal…

If it is, then it’s not quite as good as the erstwhile Office Burger episode (look it up), which passed itself off as a standalone operation rather than a Northern take on a Shoreditch idea.

If it’s not, then God help us.

The original Cereal Killer Café in London has taken a mountain of flak for various reasons – the central idea, the price charged for a bowl of cereal, etc. Others, and the business owners themselves, have hit back that it’s a small business, an entrepreneurial venture and therefore should be supported. I can see both sides.

When Channel 4 had a go at them for the amount they charge for their product in a deprived area, the business owner wisely stopped short of saying that the poorer people in the area weren’t actually their target customer. They are in business to sell a ‘scene’ to idiots with more money than sense, petrified that they might be missing out on something cool.

What actually gets me most irate about this isn’t the fact that people will willingly pay twice the amount of a box of cereal for a tenth of the amount in a bowl with milk – although that is perplexing. It’s that people are going there to be part of ‘a scene’ rather than the product, or to support local businesses.

And the ‘scene’ is eating a bowl of cereal, which is arguably the shittest scene to have ever existed. Surely we’re better than that aren’t we?

Let London swallow itself up into a black hole of self-awareness gone awry. But not Manchester. Not here?

If in London @CerealKillerUK can do it well, in Manchester, can we do it better!!? Our secret is out, spread the word! #comingsoon

Craft beer I get, even the burger thing. Some people genuinely don’t possess the skill or mental dexterity to make anything more complex than beans on toast. So fair enough – go to a place where you can get a thing that you can’t make, even if there are places that sell the thing miles cheaper but aren’t as cool on Twitter.

In days bygone, scenesters would go to places here they could discover new music, experiment with drugs or get naked with strangers.

But at a cereal café, you’re going to a place to eat a bowl of cereal. You can do that by yourself, surely? You can buy loads of the stuff at a supermarket – you know, those places you hate because they are closing down the independents, man.

But then you’d have to eat it at home, on your own, at breakfast time, and there’d be nobody around to tell you how cutting edge and amazing you are.

And that simply won’t do, will it?

Essentially, paying anyone £3 to give you a bowl of cereal is admitting to the world, and yourself, that you’re a total fucing moron on many levels.

‘But they’re imported, ou can’t get them anywhere else.’ Yes you can. Harvey Nichols. Selfridges food halls. The internet. Have a look. We live in a connected world. You can have pretty much anything delivered to your door.

But lo, it has come to this. A social club for the idiots. Satire made real with absolutely no sense of irony attached.

A respected friend, Steve Smith, who has far more knowledge than I of Shoreditch and things that are cool in general, argued the point that based on my reading of the cereal cafe movement, nobody would ever go to a pub or bar to buy a bottle or beer or wine – they’d just go to the supermarket and buy it cheaper, and consume it at home.

Sad thing is that in a lot of cases, they do. Which has brought the pub industry to its knees in recent years.

However, what people also do is access both at the same time. They ‘pre-load’ on cheap supermarket booze before hitting the pubs and clubs.

I can’t see the cereal disciples gorging on a whole variety pack before heading into town for a couple of higher priced bowls of sugary shitmunch with friends, already off their tits on Aldi own-brand.

Although if that were the case, I’d actively encourage it.

If the Manchester venue is real, it will, or course, make a fortune. But I suspect it is not.

In fact, I’d bet my specially imported box of Count Chockula on it.