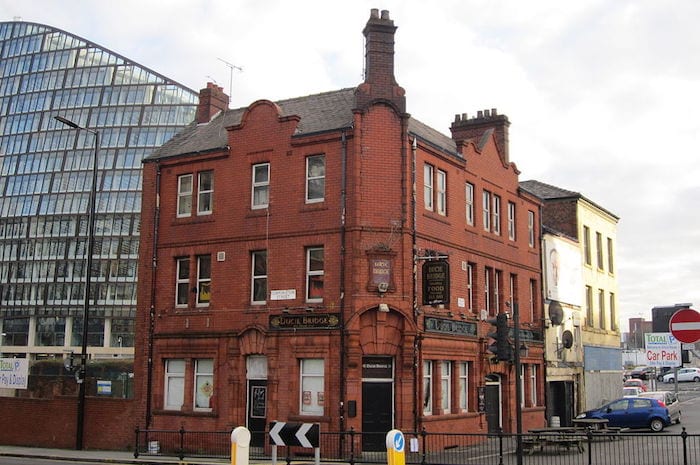 Grassroots heritage lobby group Manchester Shield has launched a last ditch public plea to rescue the Ducie Bridge pub from the wrecking ball after more than 3,150 people signed a petition to save it in just 10 days.

The iconic Victorian pub on the corner of Corporation Street and Miller Street dates back to 1892 and in recent years provided a stage for scores of up and coming bands and musicians before its owners, the Co-operative Group, forced its closure in 2015.

Manchester Shield insists that developers and local politicians need to value the talent and opinions of local people in genuine consultations regarding the built environment in central Manchester.

“People are left incredulous that this building, used as a live music venue until so recently, is now said to be beyond ‘tipping point’”, said Manchester Shield spokesman Adam Prince.

“The claim that the Ducie Bridge is so structurally unsound that the only solution is an application for demolition is frankly ridiculous. Who exactly says so? We have made an application to Historic England for them to considering listing the pub.”

Adam claims that the young squatters who were evicted from the Ducie Bridge last  autumn after the developers of NOMA – the Co-operative Group’s huge headquarters – obtained a court order, have confirmed that the building is in good condition. According to them, the pub was one of the best they had occupied as homeless activists seeking refuge in empty buildings.

“When the venue closed in August 2015, surely if the premises were indeed this unsound, they would not have been licensed,” Adam said.

“The tactic of claiming heritage buildings, deemed to be in the way of corporate development, are beyond saving is all too common. The Ducie Bridge may just be one old pub, but there’s a war of attrition going on building by building, and it all adds up, over time, to be the piecemeal death of the city’s heritage.”

“Manchester Shield will also be seeking to list other buildings in the city. We would hope that instead of a demolition ‘rush’ for a car park, a cooling off period and further consultation will follow.

In 2011, the Crown and Cushion pub, also on Corporation Street, closed its doors after its owners sold the building to the Co-operative Group. It was then flattened to make room for the redevelopment of the £1billion Co-op Quarter.  The pub occupied the site of the Crown, one of Manchester’s oldest inns, dating from 1741.

NOMA aims to transform the area north of Victoria Station into a 20-acre complex with shops, offices and public squares, eventually providing up to 10,000 jobs.

Nearby Unicol House, striking former home of the United Yeast Company in Miller Street, was demolished seven years ago and the site is now a car park. Manchester Shield fears that the Ducie Bridge will suffer the same fate.

“To claim that the Ducie Bridge is beyond saving is in stark contrast with what happened to the Welsh Baptist Chapel on Upper Brook Street which spent years on the at risk register but was rescued and redeveloped,” said Adam.

“We believe that citizens’ voices in shaping Manchester really do matter. Engagement, collaboration and advocating the civic voice in planning can and must be vastly improved. So we were particularly disturbed that, after speaking to NOMA and their public relations departments, they angrily called us for having reported a précis of the conversation on social media.

“Yet they had offered no clarity on the alleged structural damage, nothing about costs of repairs or why the Ducie Bridge needs to be demolished.  We made it very clear to them that we don’t do closed-door conversations, especially as campaigners for a building.

“Our concerns are about the constant erosion of heritage assets, the character of the streets and the memories of places people have been. It is also symbolic of the planning process and flawed consultations that seek to profit the few, whilst excluding the many.”

He added: “This petition shows an incredible impetus to do better in planning and  consultation across the city. The Ducie Bridge could survive, if NOMA were not seeking to profit over a small Victorian building, beloved by many.”