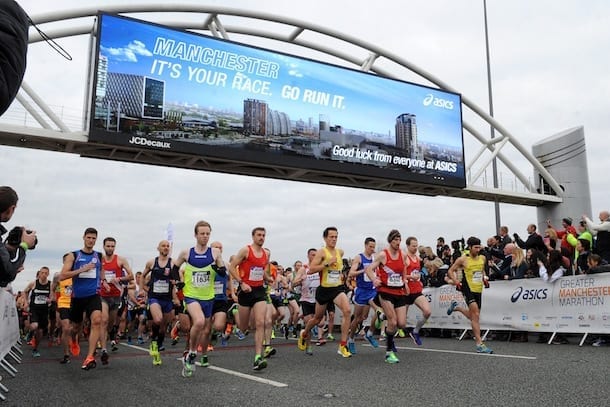 This will be the 40th Manchester Marathon since the first took place in 1908, starting and finishing at the Saracen’s Head pub in Warburton. It’s been acclaimed as the UK’s Best Marathon for two years in a row at The Running Awards.

Around 12,500 runners are expected to complete the event and raise around £3 million for charity. The support on the route is legendary so if you’re not running, why not go and support the runners – just leave the car at home as lots of roads in the Trafford area will be closed.

There are two prizes of £500 – one for Most Supportive Neighbourhood and one for Best Entertainment on the Course. The winners will be voted for by the runners

The race starts 9am at the Trafford Arch on the A56 near Old Trafford, and over the 26.2 mile course will take in Brooklands, Sale, Timperley, Urmston and Stretford. The first runners will cross the finishing line on Talbot Road outside Emirates Old Trafford, home of Lancashire Cricket Club, around 11.30.

It’s an event involving some of the best runners out there, with individual, wheelchair and relay entrants, and lots of people running for charity, too.

Shaftesbury Barnet Harrier Kojo Kyereme is on a strong footing as the current World Masters 10,000 metres champion. At 41 he shows that he still has what it takes – finishing the New York Marathon last year in a very impressive 2:26:17! Others to watch out for include East Cornwall Harriers’ Dan Nash and Joe Morwood from Aldershot District & Farnham AC.

Last year over £1.7 million was raised for charity. This year, money raised from the various events and entertainments being staged to entertain spectators will be split between this year’s official event charities: Cancer Research UK, The Christie Charity and the Royal Manchester Children’s Hospital Charity.

So whether you are watching or participating, have a great day – the weather forecast is good!

For more information on road closures visit greatermanchestermarathon.com/race-info/road-closure-info or call the traffic helpline on 0161 850 1230

Read: Rob Deering urges runners to sign up for the Great Manchester Run for Parkinson’s UK