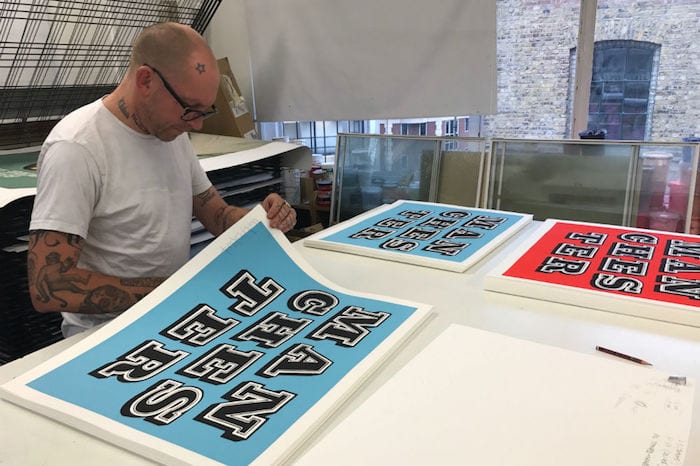 The tenth edition of the north of England’s largest art fair is bringing works by a multitude of famous artists to Manchester at the end of the month.

Damien Hirst, Tracey Emin and LS Lowry are just three of the internationally renowned artists whose work will feature at this year’s Buy Art Fair at Manchester Central.

Hirst’s silkscreen print with diamond dust, Psalm: Domini Est Terra, is being exhibited by Cornish-based The Drang Gallery; No Ball Games by Banksy is being brought to the Fair by Mancunian exhibitor Papa’s Print Shop; and Tracey Emin’s works So I Left You and With Or Without You are offered for purchase by the Royal Academy of Arts.

This year they include Ben Eine, who will be selling copies of Manchester, a limited edition print, with 10% going to The Mustard Tree charity, and Word to Mother, who has created Forever Manchester in memory of the 22 victims of the Manchester bombing.

Also featuring are Katie Edwards, winner of The Lawrence Printmaking Prize in 2017, Rosey Prince, who was selected for the 2017 Royal Academy Summer Exhibition, and Ian Rayer Smith, who has had two solo London exhibitions since taking part in the fair last year.

More than 600 artists are being exhibited at the fair with a range of work available to preview on the websites.

Since its launch in 2008, Buy Art Fair featuring The Manchester Contemporary has presented thousands of original contemporary works from 100 exhibiting UK and international galleries and artists, and has sold £3m worth of art.

It has established itself as one of the top art events in the country at which to purchase sought after works.

This year the event is anticipated to attract a record 7,000 people over its three days, with pieces available from £50 to £5,000+ including paintings, photography, sculpture and prints.

Thom Hetherington, CEO of Buy Art Fair and The Manchester Contemporary, said: “We are all incredibly proud of how Buy Art Fair has grown over the last ten years. We’ve developed a new generation of collectors in the north who appreciate the chance to own a big name, whilst also providing a platform for up and coming talent.”

The fair opens with a VIP Preview at 5pm on Friday 27 October and is open to the public  on Saturday 28 October from 10am till 6pm and Sunday 29 October till 5pm.