Why has Manchester still not got a lido? 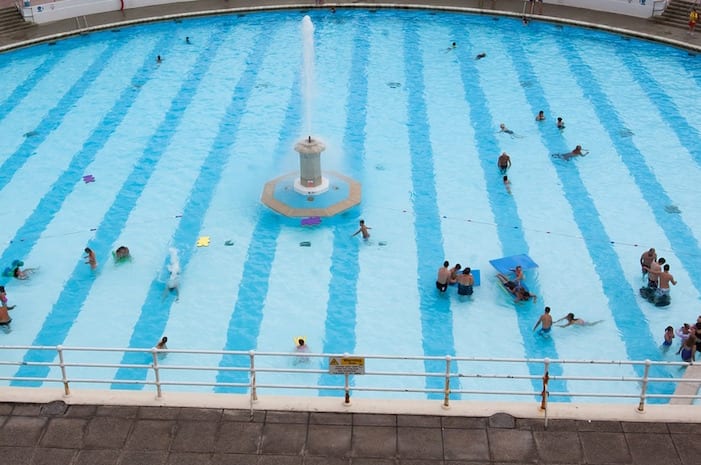 What has London got loads of that Manchester hasn’t got one of? Here’s a clue. Nantwich has got one. Ilkley has got one. Even Hathersage has got one.

The answer is an outdoor swimming pool or lido.

We used to. Back in the 1960s, there was an open air swimming pool in Norden called The Riviera.  And the Waterside Hotel & Leisure Club in Didsbury is built on the site of The Galleon, an open air pool which closed in the 80’s.

Both pools were privately owned but there were publicly owned pools in municipal parks, too. Lots of them closed in the 1960s but there are still plenty of them up and down the country. Just none in Greater Manchester.

So where can you go if the temperature is soaring and you want to swim outdoors?

You can swim at Dock 9 at Salford Quays – the old Manchester Ship Canal – but opening times are limited and it’s geared more to the serious swimmer rather than someone who wants to cool down in the summer or fancies a refreshing early morning swim before work.

Or you can go wild swimming.

But if you’re looking for a supervised outdoor swim where you don’t need a wetsuit, you’ve got to travel to places like Ilkley, Hathersage and Nantwich.

So why hasn’t Manchester got a lido? It can’t be because of the weather. Granted, we don’t have a Mediterranean climate in Manchester, but they’ve got one in Stonehaven in Scotland and it’s bloody freezing up there. So why haven’t we?

Can’t afford one? It would more than pay for itself. We think there are enough keen swimmers around to ensure it could be open all year round – many lidos up and down the country already are. There are few things more invigorating than an early morning outdoor swim.

We’ve said it before and we’ll say it again. Manchester’s got everything but a beach is a great slogan, but it’s not true. Because Manchester hasn’t got a lido either.

No room for a lido in the city centre? There’s plenty of room in Heaton Park. There used to be one there – you can see the remains. And put one in a south Manchester park while you’re at it, too.

So come on, Manchester City Council. We want a lido. And we want it now. So get cracking.