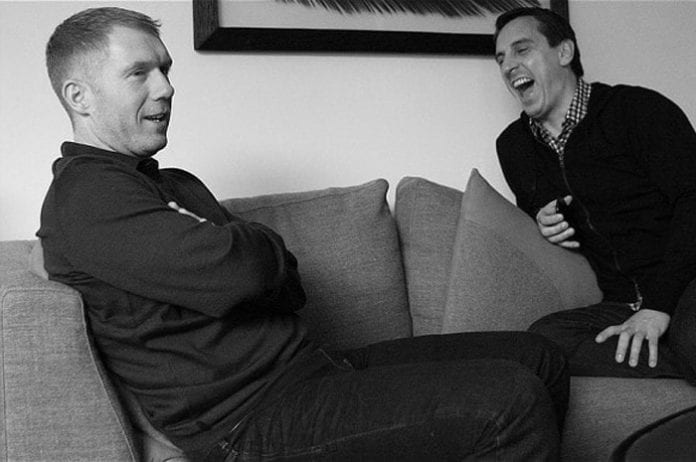 Paul Scholes hardly said a word during his playing career but since retiring he hasn’t kept quiet. He’s clearly making up for lost time.

He’s not short of an opinion or two and he’s not afraid to express them. He called Robbie Savage a ‘knobhead’ – and he’s said some controversial things, too.

He’s been critical of Van Gaal (who wasn’t?), Pogba (‘all over the place’) and Mourinho (‘not ruthless enough’).

It seems that some people aren’t happy – especially when he criticises United.

I liked Paul Scholes better when he never used to open his mouth.

I liked it when he didn’t talk #MUFC #Get United

I honestly don’t even understand #Paulscholes anymore. He talks gibberish these days.

So who the hell does Paul Scholes think he is?

Well, first of all he’s a football pundit now and he’s paid to express an opinion.

And, unlike some of his colleagues, he is refreshingly honest and speaks his mind. Why shouldn’t he? He knows a bit about football. Here’s a reminder of his credentials.

He was incontrovertibly one of the best footballers of his generation who could do just about anything. Apart from tackle. But don’t take my word for it.

Ask Zinedine Zidane: “My toughest opponent? Scholes of Manchester. He is the complete midfielder. Scholes is undoubtedly the greatest midfielder of his generation.”

Or Marcello Lippi: “Paul Scholes would have been one of my first choices for putting together a great team.”

Or Xavi: “In the last 15-20 years the best and most complete central midfielder I’ve seen is Scholes.”

Or Thierry Henry: “Without any doubt the best player in the Premiership has to be Paul Scholes.”

Or Pep Guardiola: “Out of everyone at Manchester United, I would pick out Scholes, he is the best midfielder of his generation. I would have loved to play alongside him.”

Not bad for a 5’6”asthmatic lad from Langley.

So as far as I’m concerned he has earned the right to say whatever he likes, even if I disagree with him. Which I rarely do because he talks sense.

So this comes as no surprise.