‘We just keep doing what we love to do’: Northern Uproar on writing, recording and Manchester music 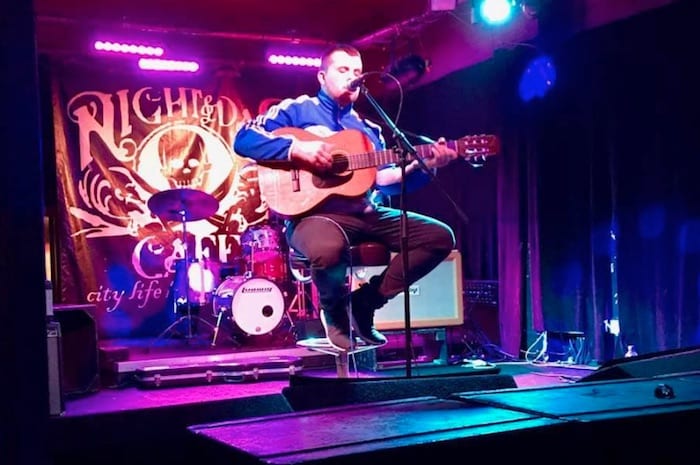 Northern Uproar are a band that certainly lives up to their name. They have a passion for melodies, hooks and brilliant live performances.

The nineties weren’t just a passing phase for them, unlike many other bands that have come and gone.

Having reformed in 2006, they’ve gone on to release two studio albums and one live album as well as touring regularly across the UK.  They’ll be touring this summer, too, as well as writing some new material.

I was lucky enough to snag an interview with lead singer and man after my own heart bassist Leon Meya to talk about new stuff they’re recording and where you can watch them perform in Manchester this year.

Leon, how’s it going? You well?

Yeah, we’ve been writing for ages. We haven’t ever stopped really, but these past few years we’ve been writing new stuff then just going in and recording it. We did an album that seems like yesterday (Hey Samurai) which was 10 completely new songs, but it was actually a couple of years ago now. So we just keep doing what we love to do.

Is the new album going to be similar to the last?

Well there’s certain things that I write that will always have a bit of similarity, but for me it’s about going for something that I enjoy, that I like; the melody and what I’m trying to aim for. The way it’s produced can make all the difference, too. All of my songs are based on acoustic guitar and by doing that they can be formatted in a couple of different ways. I try and keep things upbeat. I’ll try a blend of styles, but always a good melody and something to hook people. Sometimes you’re doing really well, sometimes not as good as you thought. It’s a very long process, writing, you know.

Are you recording it in Manchester?

There’s a few different places dotted around Manchester, not a specific one yet. The previous album was at Toast Studios in Salford. There’s a few people I need to speak to to see what ideas they’ve got to bring to the mix as well.

How far through making the new album are you?

We’re at the point where we need to jam it together. Early stages. But I enjoy this stage. I’ve always enjoyed writing. I’m very impatient, though. If something doesn’t sound good I can just ditch it. It has to sound good to me and I have to like it. You have to do it for you. If other people enjoy it, that’s even better.

I know you’re doing some touring this year and Atmosphere festival in Manchester. Will we hear any of your new stuff there?

Yeah, we’ve got quite a few summer dates booked now. We’ll be playing some of the songs off Hey Samurai. I find that with a lot of these places, though, they want to hear a lot of the old songs and you need to be open to that. I like all the old songs that we’ve played and I think it’s fantastic that we can do that, still enjoy it and still throw in some new stuff. On balance, though, it’s the older stuff. Best way to do it.

So where are some of the other places you’re playing this year?

Atmosphere Festival is May 26th. We’re playing in Nottingham at the end of this month, the Old Courts in Wigan on 8th June, which is a short train ride from Manchester, a festival in Glasgow and then on September 16th we’re playing The Ritz alongside Echobelly to name a few.

For the band that we are, these places are the perfect places for us to play. Don’t get me wrong, I’d love to play for thousands. But for pure atmosphere I like the more intimate spaces.

Do you get to watch many bands in Manchester?

Sadly I don’t, because I do a lot of music. You sort of get tired of it as well. I try to keep in tune more to what I do these days. When I was younger, like everybody, you want to sound like the people you listen to.

You started in 1995 when Britpop was booming. What was that like for you?

We got signed in 1995 and in my early days I was listening to The Beatles and Nirvana and then I got into the rave scene on a big scale. That took me away from all that, but I was always playing music. It was a crazy time.

What sort of bands did you hang around with?

Dodgy and Cast were kind of the same style as us. The Stone Roses, Oasis, those sorts of bands. We’d all be going to each other’s gigs anyway.

Where is the best place to play in Manchester?

There’s quite a few. I’d love to play the Apollo. The Ritz is always a great venue.

So what’s next for Northern Uproar?

Well we’ve got a busy year and the plan is to get as many decent things going as possible and to get the band up and running. We’re recording new stuff and we also want to just keep playing live, make it dead exciting so that people enjoy it. And that’s that really.

Read More »
September 26, 2020
PrevHave you read?Meet the new wave of urban artists coming out of Manchester’s grime scene
Next read...Why a back street behind the Arena is about to become Manchester’s sushi quarterNext