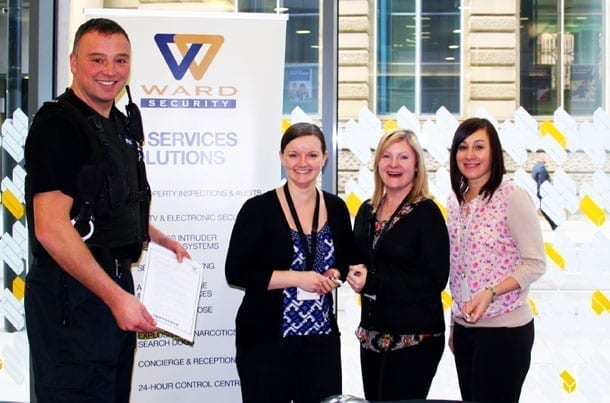 People working at 1 New York Street in Manchester are being reminded about the importance of maintaining personal safety as they travel to and from work during darker nights, thanks to an initiative by local security provider Ward Security to assist businesses on its own doorstep.

Ward Security handed-out free torches to workers based at the office as well as personal safety tip sheets to provide general reassurance to those making their way to and from the office during the darker nights. Police Officer Andrew Costello also attended the giveaway to demonstrate Manchester Police’s support for the initiative.

Lea Potts, Associate Director at Ward Security, commented: “As security experts, we want to do all that we can to demonstrate our commitment to providing safe and secure working environments by helping our own neighbours keep safe and well.

“Anxieties, especially about personal security, can be exacerbated during the longer nights of autumn and winter. We hope the free torches and our advice sheets will go some way to reassuring workers that New York Street is a safe place to work.”

PC Andrew Costello of Manchester Police commented: “Getting around in the dark can cause some people to feel anguish and a heightened sense of vulnerability. It is great to see a local company like Ward Security take proactive measures to help alleviate that anxiety by promoting awareness of the simple, practical steps that people can take to help reduce the risk of becoming a victim of crime and providing free torches.”

The torch give-away follows on from a number of initiatives created by Ward Security to ramp up security at its office locations across England. Last year, the firm launched a free Park Watch scheme near its Kent offices, which provides the commercial property equivalent of Neighbourhood Watch with participating tenants sharing information about safety and security. Ward Security intends to launch similar schemes across the UK near its regional offices