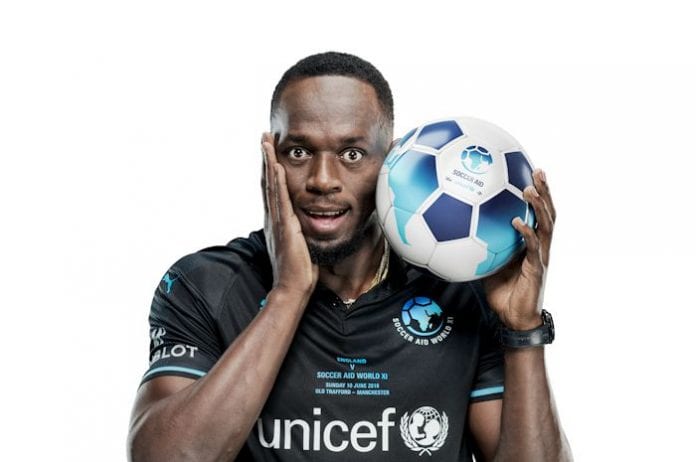 Usain’s Soccer Aid World XI will go up against Robbie’s England for Soccer Aid for Unicef, with both teams made up of A-list stars and footballing legends.

The match will take place four days before the FIFA World Cup in Russia begins and will be broadcast live on ITV.

The official launch today marks the start of a series of surprise player unveilings with Robbie kicking off the excitement by teasing newcomer Usain.

Excited to announce that @socceraid for @UNICEF_uk is back at Old Trafford on Sunday 10th June and it’s going to be bigger and better than ever. Are you ready @usainbolt?

The England v Soccer Aid World XI rivalry is set to intensify over the coming weeks, with some of football’s biggest legends and celebrities set to join the line-ups.

The fixture has previously featured A-list stars such as Will Ferrell, Woody Harrelson, Mike Myers and Niall Horan, plus footballing royalty including Maradona, Zinedine Zidane, Luis Figo and Ronaldinho. Soccer Aid for Unicef 2018 is set to be bigger and better than ever.

United fan Usain said: “It is my dream to make it as a professional footballer, so to be able to step out onto the pitch at Old Trafford in June and play against some of football’s biggest legends is going to be remarkable.

“I enjoy the thrill of competition in front of a crowd, so Robbie and his England team better watch out as I won’t be going easy on them! I’ve got a pretty special celebration planned for when I score, by the way.

“My team is going to be unbeatable – and Soccer Aid for Unicef is counting on your support to make a difference to thousands of children around the world. Come and join in the fun!”

Unicef UK ambassador and co-founder of Soccer Aid Robbie said: “I am buzzing that Soccer Aid for Unicef is back. Reclaiming the title for England this year is going to taste so much sweeter with Usain leading the Soccer Aid World XI. I can’t wait to lead out the England team in what really is a game like no other. With your support, we will help children in danger around the world.”

The match will be complemented by a mass public fundraising activity, with more details to be announced soon. On Friday 8th June a Soccer Aid Playground Challenge will involve schools up and down the country taking part in an exciting activity programme, generating vital donations.

100% of all public donations to Soccer Aid for Unicef will go towards supporting the vital work protecting children in the UK and globally. The money raised through profits from ticket sales and viewer donations during the match will add to the incredible £24 million that has already been raised through Soccer Aid over the last 12 years.