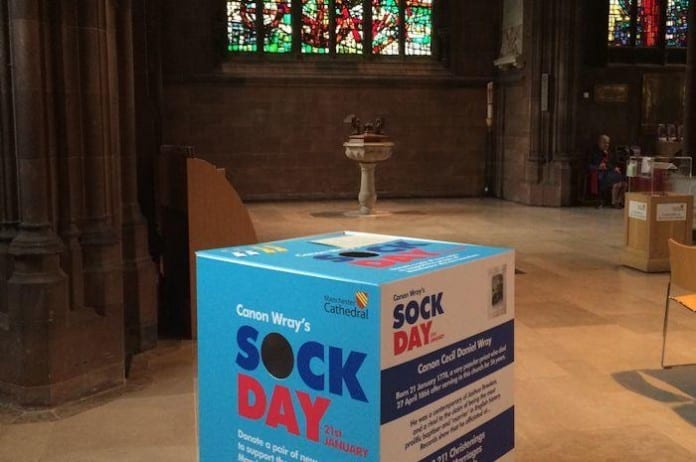 Have you ever wondered what to do with those socks you get this time of year from people – mainly aunties – who don’t know what to get you for Christmas? The unwanted stocking fillers.

Instead of putting them at the back of your sock drawer, why not give them to someone who would appreciate them?

Manchester Cathedral’s Canon Wray Sock Appeal is back for its third year and will find a good home for any pairs of new, warm socks that you would like to donate – or even buy – to support the Booth Centre in looking after those who find themselves homeless.

The appeal is named after Canon Cecil Wray, a very popular, if slightly eccentric, priest who was not afraid to speak his mind or get involved in Manchester’s political and social issues. He campaigned for new schools, the reduction of the working day to 10 hours for mill workers and was known for his sympathy for the needs of the poor.

In 1866, he set up a fund – Canon Wray’s Birthday Gift – for the provision of socks for the poor on the anniversary of his birthday.

Manchester Cathedral are now collecting socks – new pairs or any surplus pairs received over Christmas – which they will hand over to the Booth Centre for distribution to homeless people.

It may not seem much but, as Booth Centre manager Amy Hinks says, “A new pair of socks can seem like a small thing, but they are so essential for people sleeping rough on the streets.

“This small act of kindness can have a big impact, and really help someone in need during the winter months. Thank you to everyone who donates a pair of socks, we really appreciate the support!”

Last year over 500 pairs of socks were donated. “If possible we would like to improve on that record this year and continue to support the excellent work of the Booth Centre in any way we can,” says The Dean of Manchester, the Very Reverend Rogers Govender.

“The simple act of providing someone with a clean, dry pair of socks can make a small difference to the comfort of those struggling on the city’s streets this winter. We will again be encouraging the staff and clergy of Manchester Cathedral to support this legacy and make their own donations.”

This year they we will also be accepting other items including hats, scarves, gloves and toiletries. You can donate them at Manchester Cathedral right up until 21 January – the anniversary of Canon Wray’s birthday – from 10am-5pm.