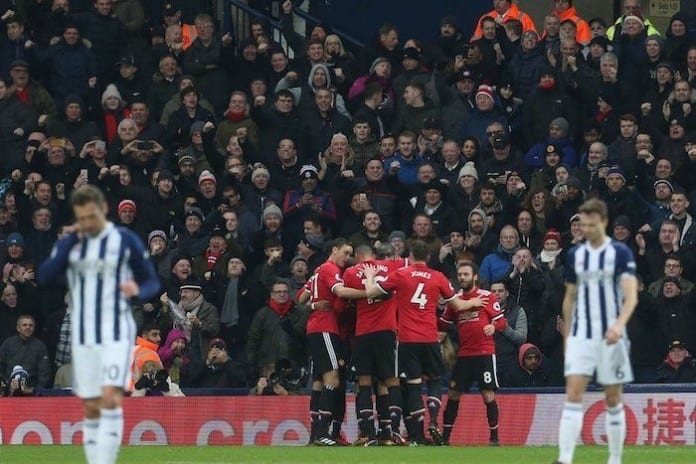 It’s a strange feeling being a United fan at the moment.

The first half of this season should really be viewed as a success. We’re second in the league, we’ve got more points at this stage of the season than in 16 of Fergie’s seasons and the days of Moyes and Van Gaal feel long gone.

Let’s not forget where we finished last season too.

We’re also through to the knock-out stage of the Champions League for the first time in four seasons, we have one of the brightest English talents (who’s also a local lad), and the best goalkeeper in the world.

Things aren’t too bad. Yet it doesn’t feel that way. Despite only losing one in nine and winning three on the bounce away, there’s a feeling that something’s missing at Old Trafford.

There’s only one place to start really. You can’t legislate for City’s form. You have to hold your hands up, Man City have been absolutely fantastic so far this season. They’re the best team by a mile and will deservedly win the league. If they don’t, it will be the greatest slip up in Premier League history.

At last! A proper Manchester derby that had everything – on and off the pitch

But that’s enough about them. We need to look at ourselves to understand what doesn’t quite feel right about United.

The way we’ve been playing of late has had that dour feel to it. The home game against Bournemouth was dull, laboured and lucky.

The performance against West Brom yesterday was clinical when we had to be, but sloppy enough to nearly cost us.

The way that the team played in the Manchester derby simply wasn’t right. There seemed a lack of passion, cohesion and ultimately belief that they could get anything against City. That lack of ambition for a club the size and with the history of United was a poor showing and didn’t sit well at all with the fans.

There’s no doubt that the loss of Pogba has been huge in the last three games. When he was back in the side after injury he completely transformed United.

He gives Mourinho’s side something different. The speed of transition and ability to carry the ball enables quick counterattacks – the match against Arsenal at the Emirates is the perfect example of this. Swap him for Ander Herrera and United are a much poorer side.

Pogba has missed 10 of United’s 18 Premier League games this season, which is a huge number to be without your best player for. If he stays fit and free of suspension from here on in, there’s no doubt we’ll look a much better side. The fans will feel more entertained, we’ll have an option to counterattack in the big matches and the side will be much more balanced. It’s just a shame the league is gone.

So, what can United fans hope for here on in?

There’s no doubting Mourinho has created a side made for cup competitions. They proved that last season. The triumph in the Europa League will no doubt set them in good stead for a real go in the Champions League.

The way he’s transformed the European away form is not to be sniffed at – the Basel result aside – and with a winnable tie in the next round, things are looking OK in Europe. However, it is a huge stretch to see this United team getting anywhere close to winning it.

Our best hopes are the domestic cup competitions. Wednesday sees a quarter final trip to Bristol City in the League Cup. If United can navigate that potential banana skin, you’d fancy them to go on and win it just as they did last season. You could also see Mourinho’s pragmatic methods putting together a decent FA Cup run.

But will that be enough? With the league gone already the season must be salvaged. The worry is that the Mourinho wheels may soon fall off and this could be as good as it gets.