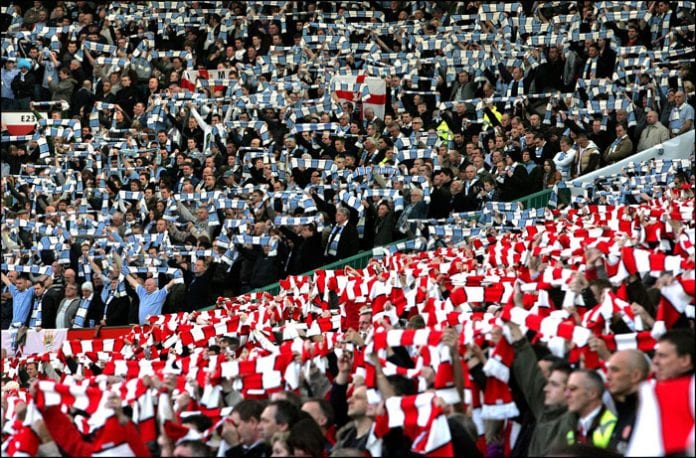 Success for United this season will clearly be to collapse over the line into third or fourth or maybe even just not getting spanked by mediocre mid-ranking teams.

But what is giving United fans sleepless nights is that the two teams who look like cleaning up are the very worst of the rest for the red half of Manchester – the noisy neighbours and the scousers.

A terrible quandary confronts Manchester United fans. Having celebrated a double dose of VAR schadenfreude last Wednesday and the awful prospect of Manchester City achieving a historic quadruple disappear, we now face a new nightmare: what if Liverpool do the League and European Cup double?

‘It is not enough to succeed. Others must fail’, to quote Gore Vidal.

Let’s face it, whoever wins the game between Liverpool and Barcelona looks set to win the  Champions League this year – and Liverpool’s run-in in the Premier League looks banana- free at the moment.

Man City need Liverpool to slip up. For United fans it’s horrific, but we are left in the invidious position of wanting to see our own team with Ole at the wheel actually lose to City in order to save humanity from a Liverpool Premier League win.

How could this happen? What has happened to the world?  Everything has become murky and upside down since David Cameron came to power back in 2010.  Man City and Spurs in a Champions League quarter-final is like someone has travelled back a million years in time and trodden on a cockroach, changing the course of history for ever.

For Man City, the disappointment they face having lost to Spurs on away goals must burn. They had the better players and squad and looked set to sweep Spurs aside when 4-2 up on the night – then those cruel VAR decisions.

I’m a fan of VAR, mainly because my selective memory thinks of some very unfair decisions made against Man United in Europe in the past: Nani’s sending off versus Real Madrid at Old Trafford; the two soft yellow cards resulting in Rafael’s sending off against Bayern Munich; Roy Keane’s red card against Jose’s Porto; the disgraceful disallowing of a perfectly good Paul Scholes goal, also against Porto, at Old Trafford; and a disallowed Denis Law goal against AC Milan in 1969 that would have sent European Cup holders United into the final against Ajax.

For United it’s almost as if VAR in Europe has taken too long to emerge.

But back to Man City. Do they now have the mental strength to carry on and try and win every match? There is the danger that subconscious mental fatigue can set in and they  finish what was a very promising season with just the League Cup in their cabinet. A season of great promise reduced to the same level as that 1976 League Cup win minus the Dennis Tueart overhead kick in the final.

This is something that would normally leave most United fans delighted if it didn’t mean that Liverpool would be champions. I mean how painful is it? It’s like having to pick which man or woman your loved one will leave you for.

It was fun last year when City managed to lose to Liverpool in Europe and were beaten by United, who came back from two down to snatch a glorious victory and delay City’s inevitable title win, thanks to a superb display from Paul Pogba.

This year it’s different. Few Manchester United fans actually want to see United beat City or grab a draw, despite the fact we need the points to try and finish fourth.

United have been looking rather leggy of late. Against Everton they looked dead on their feet. It may be better if Ole rested some of the players so they are fresh for the six pointer versus Chelsea.

Knowing what a great sense of humour the scousers have and how they love the banter – after all they never ever tire of telling everyone, everywhere, always, that this is the case – Ole should put out the youth team. Bantz, lads, bantz.

Either way, it is the most unusual circumstances surrounding a derby game I can recall – and in many ways as tense as the humiliation of seeing City win the title at the Eitihad last year.

Yes, it will be grim to see United go down to Man City at Old Trafford. But for United fans it’s only – to coin a much used phrase – short term pain. Because the agony of a Liverpool title win, and enabling that win, could be too much to bear, especially if Liverpool also go on to win a 6th European Cup.

For United, it’s been a strange season but we’ve now at least got back to actually enjoying watching United play and having a manager we actually like after what seems like an eternity.

As for City, it seems having a great manager, very good players and unlimited wads of cash to spend can’t buy glory, even if it can manage to win you some trophies.

We can only hope for the best: that Liverpool flag at the final hurdle and City lose to United but somehow scramble their way to win the League and Barcelona leave scouse hopes in tatters.

Football was ever thus. It’s the hope that kills.