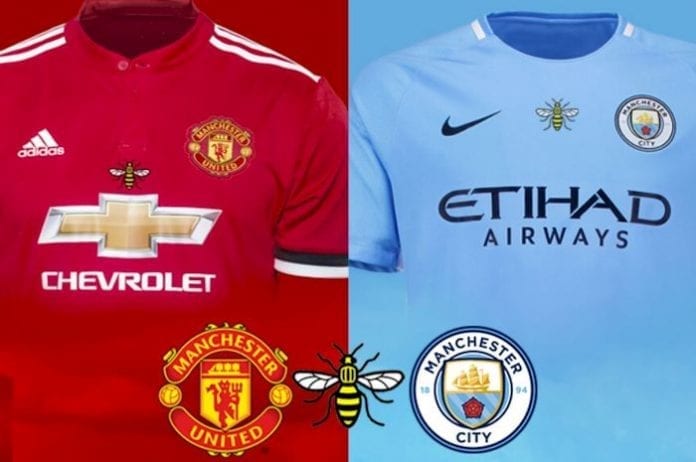 When Manchester United and Manchester City play each other in a pre-season friendly next week, both teams will wear shirts featuring the iconic worker bee symbol as a mark of respect for those affected by the Arena terrorist attack.

The match, which takes place on Thursday 20th July at the NRG Stadium, Houston at 8.30pm local time (2.30am Friday BST), will be the first Manchester derby to take place outside the UK and the first meeting between the two clubs since the Arena terror attack in May.

The initiative follows the launch of #ACITYUNITED when the clubs pledged a £1 million joint donation to the Emergency Fund.

The money from the fund will help the families of the 22 people who died in the atrocity and the 64 people who were injured.

“The city of Manchester has shown great strength and unity since the tragic terror attack in May, showing the country and the world how special this city really is,” said Manchester United executive chairman Ed Woodward.

“Having the worker bee on our shirts once again shows the community spirit of our city and football club and it is only natural that we continue to help all of those affected, through this fundraising and awareness, with millions of fans across the world watching this game.”

Manchester City chief executive officer Ferran Soriano said: “Manchester continues to show great strength and sense of community since May’s devastating attack and the thoughts of everyone at Manchester City remain with those affected.

“The worker bee symbolises everything that makes Manchester such a special city and our players will wear it on their shirts with immense pride, as a demonstration of solidarity with the Manchester community.”

Both clubs will make the match-worn shirts available for fans to purchase via auction after the match, with all proceeds going to the We Love Manchester Emergency Fund, and will announce details of how to purchase them in coming weeks.