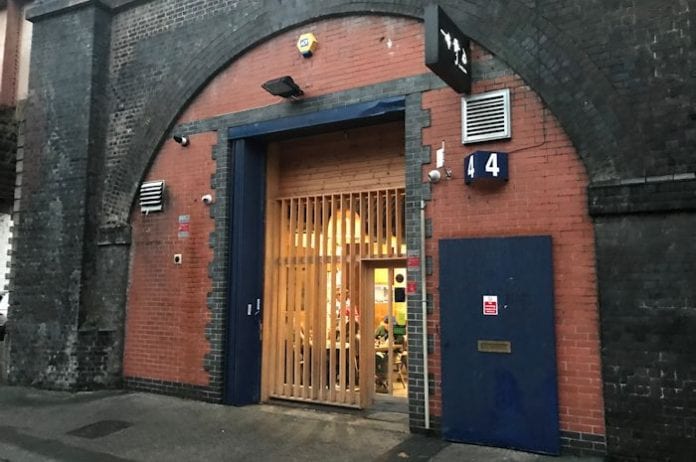 Japan can be elaborately multi-faceted and confusing to most of us in the West. As well as being a technological giant at the forefront of our ever developing modern world, it’s steeped in tradition, politeness and strict social convention. Because of this complexity and a way of living that is so wildly different from our own, Japan is fascinating to us.

Sofia Coppola’s 2003 film, Lost in Translation, perfectly depicts these differences in our cultures. And although the story of romance is ostensibly between two unlikely adults lost in alien surroundings and their own lives, there is also a third character – Japan itself. Always on the move but at the same time steeped in ceremony – especially in its food and drink.

The rise of the Japanese economy in the late 70s helped pave the way for sushi’s arrival on our high streets (alongside their electronic goods and contemporary design). And this clean and relatively healthy way of eating has grown from there, readily available in most food-chains, supermarkets, and Japanese restaurants and noodle bars. 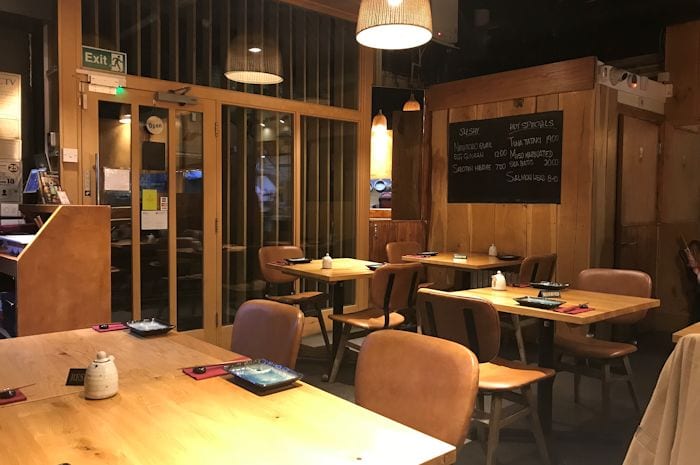 But one thing you won’t find quite so easily in Manchester is a sushi bar dedicated to the art and service of sushi and sashimi alone. With the exception of Umezushi.

Opened by Terry Huang in 2012, this little restaurant tucked away in a railway arch near Manchester Arena has been gaining both local and national recognition for its quality, service, and value.

Entry is via a buzzer. We leave the pouring rain behind us as we are welcomed inside and transported to a little piece of Japan.

Background music is traditional and courtly with a string section – possibly a shamisen? And anyone who doesn’t know their maguro from their unagi needn’t worry because everything is perfectly explained in the thoughtfully worded menu. Liesbeth our server is politeness itself. 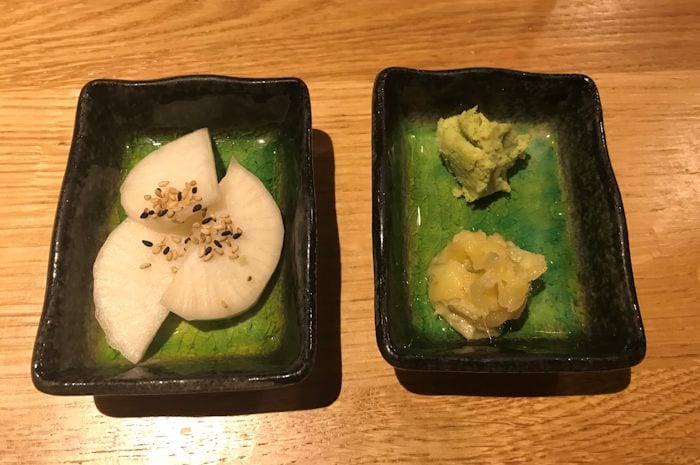 These condiments arrive at our table setting the tone for the entire meal – precision and attention to detail set amongst the most beautiful Doki Japanese tableware. The wasabi paste is nothing like the eye-watering stuff I’ve tried previously. It has the same depth but none of the harshness. The daikon, or pickled radish, is crisp and clean, marinated in rice vinegar and sugar.

There is a misconception that Japanese rice wine, or sake, should be served warm. Although traditionally this was the case – the main reason being to mask the rough flavour from unrefined brewing techniques – good sake should actually be enjoyed slightly chilled, as to heat it would actually destroy the much more delicate and fragrant notes that are now being achieved.

Our Komachi Sakura Sake (£8.10 175ml) was served just so. Rich and smooth, it was a great recommendation for the food we ate this evening. 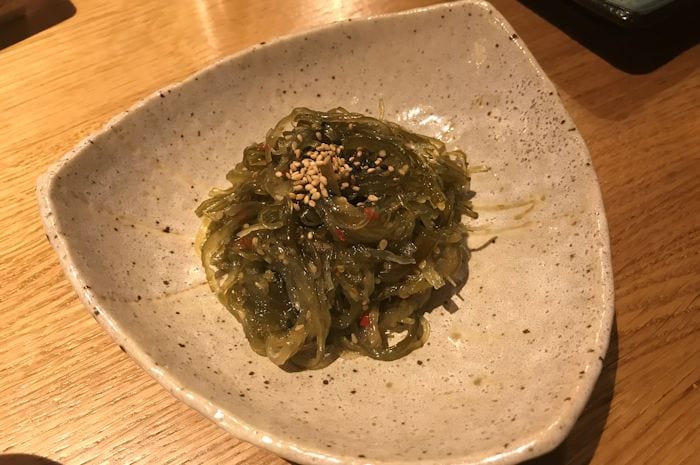 Sweet and mildly flavoured wakame, the acquired satin-meets-slime texture of edible marine algae tossed a the light sesame seed dressing. I felt the fact that it was not as bright green as some I’ve seen was a good thing, less artificial, but I’m no seaweed expert. It was fantastic. 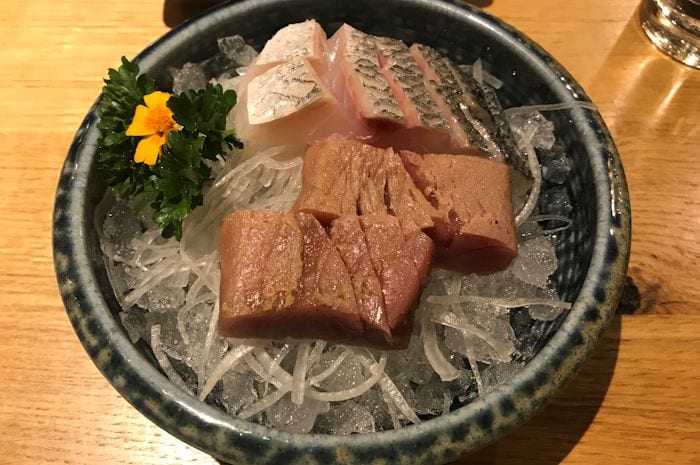 As I’ve said, the in-depth menu explains three types of tuna they serve based upon which part of the tuna it is taken from. It is one of the most popular and prized fish used for sashimi, arguably the best way to enjoy fresh seafood in its purest form. We chose the chutoro, found between the core and the belly, which includes a range of textures from lean to fatty. It was perfect.

The more sustainable sea bream was surprisingly light for a meaty fish and equally pleasurable. Mixed with the mild wasabi, ginger and soy, the entire eating process was so enjoyable I simply didn’t want it to end. 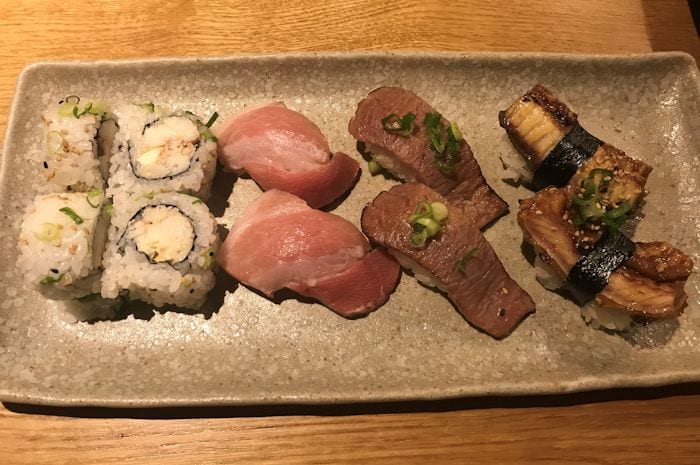 Next up, the sushi. The slightly sticky rice base acts as a filler, meaning you won’t leave hungry or need the chippy on the way home. Added sugar and rice vinegar gives it a subtle sweet and sour taste, and it’s topped or rolled with our selection of goodies.

Hand-picked crabmeat was sweet and delicate, served in the popular Californian roll style. With its marbling effect and more melting texture, the otoro – the fattiest part of the tuna – is unlike anything you will have been served before. The wonderful warm eel had the biggest sea-salty flavour of them all. The wagyu sirloin was delicious and enjoyed by us both but even I winced at the £13 price tag. Ouch. 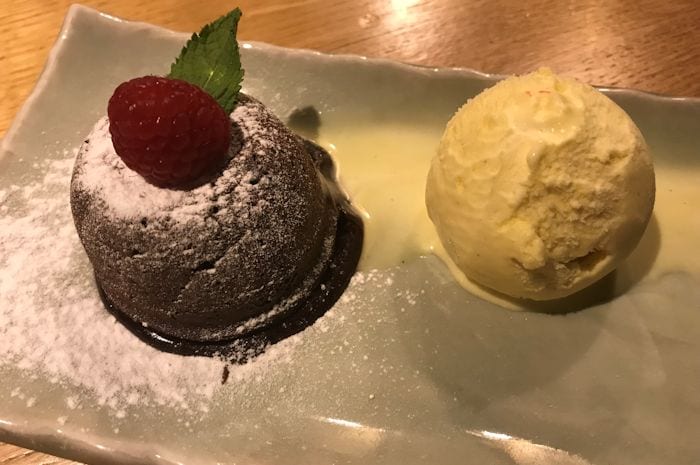 My companion started to soften at this point. I think the Umezushi magic was finally getting through to him, too. As there were only two desserts on the menu, we agreed we needed to try one of each. The sensual  fondant with a raspberry nipple was a faultless example of this dark chocolate melting-middle pud. 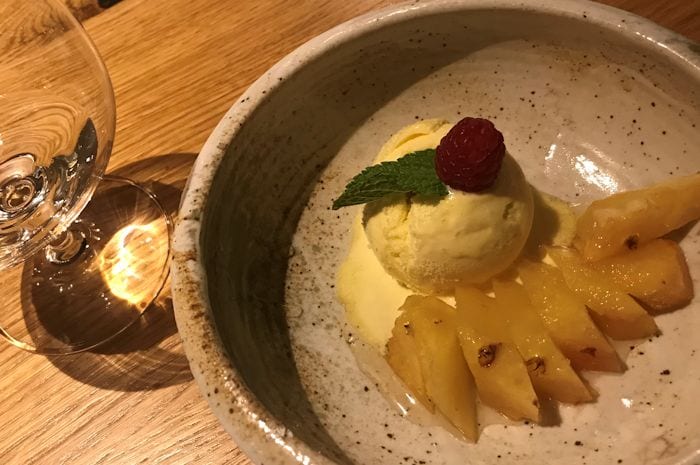 This one felt more befitting in this setting somehow. Warm, juicy and golden pineapple in a rich plum sake. Beautifully paired with the scochu, a kind of Japanese vodka which warmed our cockles before heading back out into the rain.

With regards to the price, decent seafood is expensive enough, but this quality is at another level. And with all the preparation and painstaking technique (in particular years of knife-training skills) involved, on the whole this menu delivers value for money for the superior product you receive.

My plus-one seemed consistently unimpressed. Here’s the thing: this style of food just isn’t for everyone. You either like it or you don’t.

But for anyone who loves this style of cuisine, it’s a truly unique and perfect dining experience and one that won’t be lost in translation. 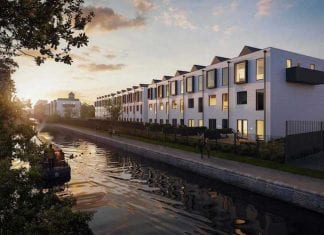