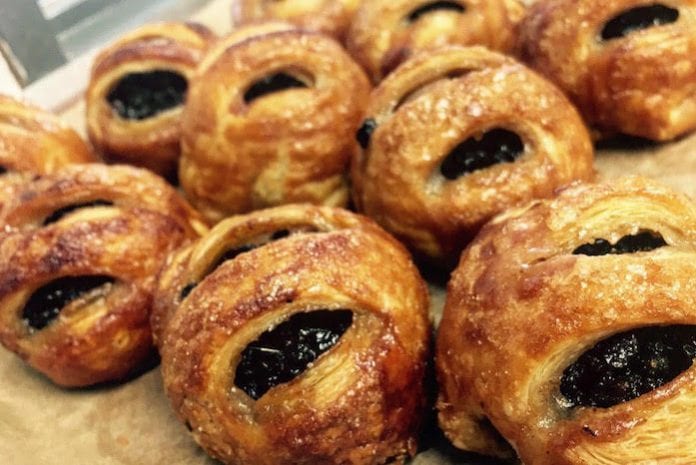 Some of the north west’s top chefs will be competing against each other to bake some of the best Eccles cakes the north of England has seen.

Adam Reid (The French), Lisa Allen (Northcote Manor), Mary-Ellen McTague (Aumbry/ The Fat Duck), and Andrew Nutter (Nutters/The Bird at Birtle) are amongst the chefs who will battle it out during a live cook-off.

The competition is the brainchild of restaurant blogger Hungry Hoss, a fan of Eccles cakes, and a long-term supporter of Manchester-based homeless charity Not Just Soup.

“The rules are pretty simple,” he says. “The Eccles cake creations can be traditional or inventive, but need to be ‘recognisable’ in some way as Eccles cakes.”

He will be joined on the judging panel by Michelin-starred chef and proprietor of Fraiche, Marc Wilkinson; CEO of Northern Restaurant & Bar, Thom Hetherington; and Guardian and BBC Good Food writer, Tony Naylor to judge the sultana and pastry goodies.

The Eccles cake, or squashed fly cake as it’s sometimes known, originated in Eccles in 1793 and is a small round cake of buttery flaky pastry filled with currants (not flies.) Sold from James Birch’s shop at the corner of Vicarage Rd and St Mary’s Road, they literally flew out like hot cakes. And although traditionally made in the town from where they get their name, Eccles cakes are now famous throughout the world.

The bake-off will take place on Monday 24 April at Solita, Didsbury. Tickets for the live event cost £25. Guests will receive a welcome drink, starter, main, and dessert wine to sample alongside the Eccles cakes produced from the impressive line- up of participating chefs and restaurants.  Proceeds from ticket sales will be donated to Not Just Soup and a charity of the winning chef’s choice.

Not Just Soup was founded by restaurauteur and creator of the Solita brand, Franco Sotgiu in response to the amount of homelessness in the city. Every week local restaurants take it in turns to cook for the city’s hungry and homeless.