Three to see this weekend: new art at HOME, a railway roam and beery foam

This weekend sees the HSBC UK National Track Championships return to the HSBC UK National Cycling Centre in Manchester, home of the Great Britain Cycling Team, from 25th-27th January. The championships – the highlight of the domestic track calendar – will see Britain’s best riders compete against each other for the prestigious red, white and blue national champions’ jerseys.

As well as new exhibitions (see below), HOME hosts Platform Manchester on Friday 25th, celebrating the huge amount of talent in our city. Platform Manchester uses a range of hip-hop dance styles and music to create mesmerising, high energy performances not to be missed.

On Sunday you can watch the runners in RunThrough at Heaton Park. The annual stop includes 5k, 10k and half marathons with a course across the park and near the classical house within.

And there’s plenty more to keep you busy… 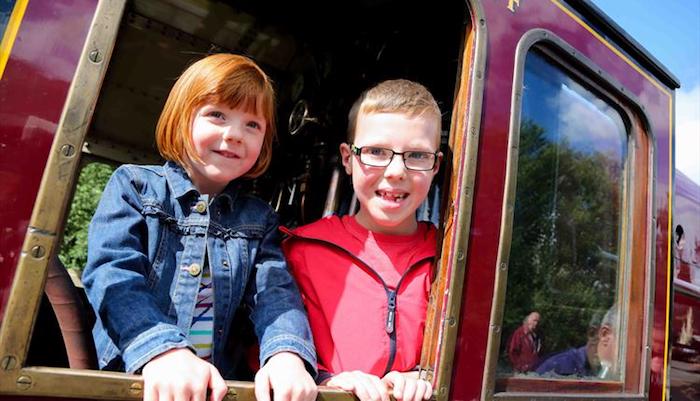 Introduce your family to new experiences and adventures at the East Lancashire Railway with the Kids’ Go Free offer. All weekend one child accompanying one Freedom of the Line paying adult will be able to travel for free. All you have to do is download a voucher and present it when purchasing your ticket.

With a history stretching back to the beginning of the Industrial Revolution, the East Lancashire Railway is the steam powered heart of the Irwell Valley, pumping goods and people around the region for nearly 200 years.

Free travel is for children aged 5 to 17 only, available Saturday and Sunday from 9am until 4pm subject to terms and conditions.

HOME is the home of a new solo exhibition by British artist David Bethell, following the story of a man’s struggle to escape from his own self-induced purgatory. Taking place in an isolated woodland, the story follows the protagonist’s futile attempts to escape his ramshackle shack via a wooden balloon.

A man opens the front door of his shack in a woodland clearing. He puts his face to the opening and looks around. He closes the door. Littering the ground outside is a collection of contraptions made from timber. Poking through the top of the shack is a wooden balloon…

The exhibition features David’s debut short film for the first time. As part of this solo gallery presentation, Fleeting Flights includes the many elaborate wooden contraptions designed and built by the artist. He has described it as his “most ambitious project to date.”

Fleeting Flights is co-produced and curated by Mark Devereux Projects and HOME and is displaying from 25th January until 17th March 2019. Entry is free.

Manchester Beer & Cider Festival returns this week and is in full flow over the weekend. One of the prime things to see is a new bar being ‘built’ for the duration. Organisers are working with the Society for the Preservation of Beers from the Wood, and a host of interesting beers from breweries large and small are heading to the event.

Festival beer orderer John O’Donnell said: “MBCF has always succeeded in showing that traditional brewers and beers can happily sit alongside the most cutting edge craft beers, so we are excited about being able to add the Beers From The Wood bar.

“We should have around 50 beers being served from wooden casks with some of the country’s finest breweries represented – the three beers from Wylam will be exceptional plus we’ll have Elland’s 1872 Porter, a former Champion Beer of Britain. Manchester’s own Blackjack Beers have teamed up with Sheffield’s barrel ageing specialists Abbeydale to produce a special white stout for the bar, while Brass Castle brewery have put the former MBCF Beer Of The Festival Bad Kitty into bourbon casks for us”.

There’ll also be a chance to taste while listening to an expert. Roger Protz is probably Britain’s best known beer writer, and he’ll be running a tutored tasting on the Friday afternoon.