This weekend is the one for all those festival fanatics out there. Squeeze into some lederhosen and get yourself down to the badass Bavarian-style Oktoberfest where you can kick start the weekend on a high note. There will be beer. Lots of it. For those who are a little more science minded, Manchester Science Festival is back in town and in full swing. If you consider yourself more of a folk buff then perhaps Manchester Folk Fest is the one for you? Whatever takes your fancy, have fun. Please drink responsibly etc. 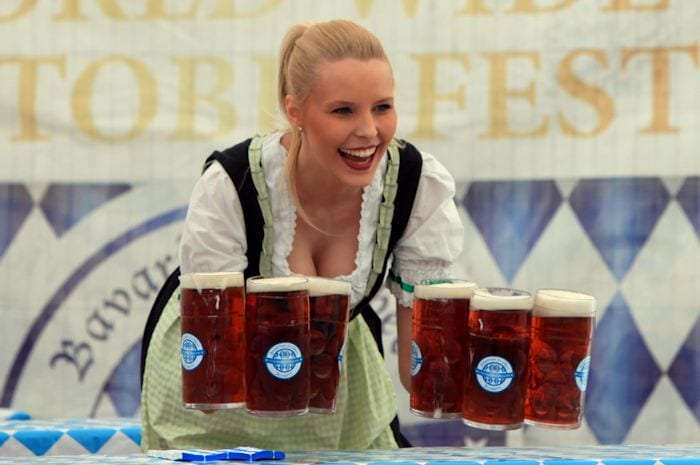 It’s the month of autumn leaves, hot chocolate and, of course, the long awaited Oktoberfest. So get your dirndl and lederhosen at the ready because this weekend Albert Square is being transformed into a traditional Bavarian Oktoberfest with live traditional oompah music and German beer served up in giant two pint glasses. If it’s all getting a little too busy inside the 2000-seater party tent, there’ll be an open-air beer garden and pop-up village to kick back in. Grab yourself some twisted-knot bread, bratwurst, schnitzel and German-style roast pork to seal the Bavarian deal. Get your tickets here.

This is the first year of a major new music festival at venues across the city centre including HOME, Gorilla, which showcases the diversity of new English folk music. There’s a strong strand of protest singers, some surprising combinations of artists, the premiere of a new collaboration between folk legend Kathryn Tickell and literary legend David Almond before a national tour, plus clog dancing, spoon carving, large scale concerts and pub singarounds. More here.

Manchester Science Festival is back with a big bang. 11 days and hundreds of events, from exploring robot armies to chilling out in kid-free after dark playgrounds. There’s also a selection of silver screen specials so grab the popcorn and kick back in a space where science is made cool. Ish. More here.