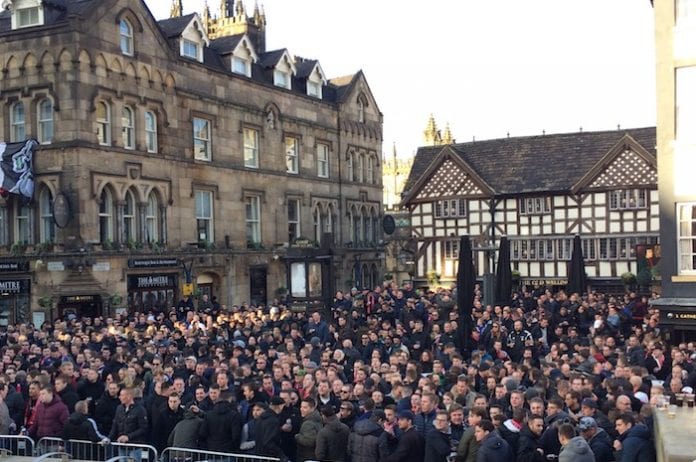 Around 7,500 Feyenoord supporters descended on the city centre this afternoon as their team take on Manchester United in tonight’s Europa League tie. The travelling fans amassed around Sinclair’s Oyster Bar, as shoppers from the nearby Christmas Markets found themselves drawn to the jovial chants of the passionate Dutch support.

Big European nights aren’t exactly new for the city, with both United and City hosting Europe’s elite on a number of occasions. And while it may not have the same heritage as Old Trafford, Sinclair’s has developed something of a reputation among away supporters in recent years, with rival fans making the famous bar an honorary home away from home.

Fans were in good spirit as they traded songs and guzzled down beer with each other, while locals took time away from their shopping to grab some snaps and learn a new chant or two. Tempers threatened to spoil over however when a small group of United fans began chanting back, which resulted in a flare being lit and several beers being thrown.

Officers from Greater Manchester Police were quick to make their presence known however, with precautionary barriers being put in place to reduce the risk of clashes. Police are understandably nervous however, with Sevilla fans clashing outside the bar just last year which resulted in several arrests and thousands of pounds in damage.

Despite United’s absence from the Champions League tin recent years, they’re still seen by many travelling supporters as the club to beat in Manchester. Old Trafford has hosted plenty of famous European nights and both sets of fans will be hoping for more of the same tonight.

Having already tasted victory against the Reds in their home ground with a narrow 1-0 victory, the Feyenoord supporters will again be looking for three points and the boasting rights of having done the double over United. This won’t exactly a walk in the park for the Reds, as a loss could potentially result in their elimination from the competition.

With the stakes high, United know they must win tonight and overcome a strong Feyenoord side who currently find themselves two points clear in the Eredivisie. Jose Mourinho’s side haven’t shared the same joy however, with a disappointing 1-1 draw with Arsenal at the weekend leaving the side six points clear of the Champions League spots in 6th place.