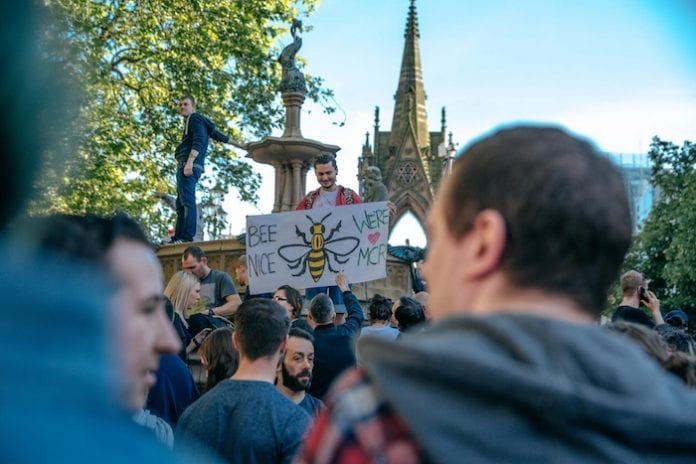 It can seem impossible to put devastation into words.  The appalling terror attack on the Manchester Arena on the evening of 22nd May left 22 dead and 59 injured.

But if there’s one thing that Manchester is good at it’s harnessing the defiant energy of people and standing together through shows of solidarity, community action and words. These heartfelt poems show what a resilient and creative place it is.

Manchester is made with a common thread

From the cotton-age, to years ahead

The place of industrial revolution

We know what it is to forge a future

Dating back to empires of Rome

Here Mamucium set up as home

Taking various shapes along the years

And now it will not fall to fear.

For this is a place of builders, inventors

One of the world’s first railway stations

Knows how to make a proper cuppa

From the first mill to Trade Union Congress

The city knows how to grow and progress

For we split atoms, not each other

This is a hub of creative culture

Will not be silenced by a single act

When Manchester hurts, it just fights back

The worker bee is on our sleeves

Northern grit in the air we breathe.

Home of the computer, the Hacienda

Football teams on the world  agenda

Built on the bedrock of what we believe

Which is that we all matter, stand together

Will look forward and still remember

For we are strong and we are tough

And the common thread we have is love.

The Manchester Way by Mike Richardson

Twenty two lives which were taken all too soon

An exciting occasion turned to darkness and gloom

But Manchester remembers those beautiful souls

Eager and ready to pursue their goals

A city standing together in such a tragic event

To these mindless morons a message we have sent

You cannot divide us from our one common goal

To serve justice for those innocent lives you have stole

Today you have hurt us, it more pains me to say

But tomorrow we stand together this is the Manchester way

One Love World by Dan Marshall

Heartbroken families of those who died.

The tale of their lives remains untold by the fire,

to be remembered by us, not a funeral pyre.

A living memory where love is inspired.

All that they were, and for those whom they cared,

it makes us feel anger that they couldn’t be spared.

The shiver down our backs, awakens us to another world,

so let their stories unfold before we get old,

not to cruise on the back of a broken duvet dream,

but to show no fear of killers unseen.

There’s a lot of pain in our neighbourhood,

a crazed man murders everyone he can,

his rage is untamed and knows not bad from good.

In his own mind, what is right and wrong,

bears no consequence to the truth beyond his mental fence;

a thin line between madness and spiritual deliverance.

His terrorism was no coincidence.

He was simply inculcated, poisoned

and educated, to eschew all desires

but destroy what love created.

So while there are many reasons for embracing our rage,

and justifying another war to wage,

keeping our love sacred is the most important of all,

it makes us tall, it honours their fall,

and after all that’s what we are,

one and the same as the stars we gaze,

a supernova explosion from which our bodies are made

So let the flags fly for the innocent who died

and celebrate their short but magnificent lives.

And while the media are keen to smooth down the truth,

which hides the building of actual proof

that the terrorism tango takes not one but two;

Know that peace in our world is easy to choose,

it begins in our minds and requires no feuds.

Our hearts are broken

1 second their lives were stolen

1 second the angels heard their cry

1 second they fell from the sky

1 second the angels came together

They whispered words close to their ears

No more pain and no more tears

Until we meet again 1 day

Every minute of every day you are in our hearts and there you’ll stay.

We watch the headlines of bombings

Through a television screen

To commemorate the scenes

We ache for their loved ones

Shed a tear for all those lost

But given the distance it happened

We don’t feel the terror it embossed

We hurt but we don’t really feel

Until the evil enters our own city

It ruins your faith in humanity

It’s 4am but you can’t sleep

When the safest place you feel, now isn’t your home

With each report you weep some more

Innocent kids have lost their right to live

There’s a world out their they’ll never know.

The police guard around the clock

The city a ghost town in aftershock

But a selfish act of one

Will not defeat this crowd

Because we are Manchester;

We stand together, strong & proud

You can do your worst

But we’ll always rise from the dust

This is our city, our people

United we stand, in each other we trust.

So let us mourn for the innocent

Let us love the ones who’ve lost

Manchester will never bow down

We protect our home at any cost.

Please don’t hesitate to have your say below…