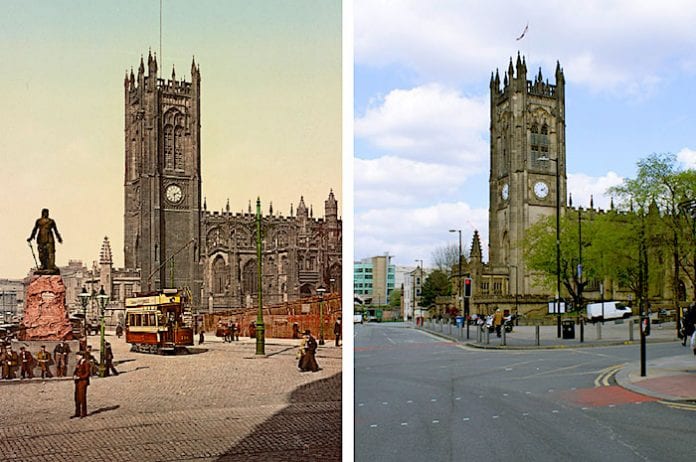 Manchester’s going through such transition that being away for even a week or two means you could be in for a surprise on your return.

Wherever you look, buildings are being demolished, shrouded in scaffolding as they undergo extensive renovation, or evolving into burgeoning skyscrapers. The rapid change can be disconcerting

But with so much focus on the future, sometimes it’s worth taking a moment and reflecting on the past to see how far we’ve come. A set of new animated images allows us to do just that by whisking us back to Victorian England.

Cleverly amalgamating and merging archive and present-day pictures, the images, created for On Stride Financial, allow us to see the changes that have taken place over the last 125 years in cities across the UK, including Manchester.

The focus here is on Victoria Street, close to Cateaton Street and Harvey Nichols, where the cobblestones have long since disappeared to make way for cars – as has a controversial statue of Oliver Cromwell.

In the old image, you can see flat-capped gentlemen perched on the base of the statue that was a gift to the city from Elizabeth Heywood, the wife of the 19th-century mayor Abel Heywood, in honour of her late husband Thomas Goadsby (who just happened to be the city’s previous mayor).

Although the statue was supposedly meant for Manchester Town Hall, Cromwell’s political divisiveness saw it erected on the street instead. In the 1980s, it was relocated to Wythenshawe Park.

The statue might have disappeared, but the skyline, looking in the direction of Victoria train station, has remained relatively low and unaltered over the decades, and continues to be dominated by the 15th century Manchester Cathedral.

Renowned for its Gothic architectural style, the cathedral stands proud as it has for almost 600 years. Construction began back in 1421, although there’s evidence of an early Saxon church dating back to 700 AD on the same site, and in 1086, a Manchester ‘Parish Church’ is mentioned in William the Conqueror’s Domesday Book.

Given this part of the city is steeped in history, it’s little surprise it’s been rebranded and renamed Manchester’s Medieval Quarter.

The other cities included in the project are Bristol, Newcastle, Liverpool, Scarborough, London and Worthing and are part of a series of creative content campaigns commissioned to inspire people to view where they live in a new light and encourage visitors to explore these places in person too.

“To get this project started, we delved into vintage photographs from the Victorian era that are publicly available,” says a spokesperson for Neomam Studios who created the content.

“Our researchers dug deep to unearth photos from different cities and towns across England. Then, with the help of local photographers, we took a present day shot from the exact same angle to show how the areas have changed over time.

“As well as static composite images, we also created animated GIF versions that blend present day with the Victorian era in a never-seen-before way.

“The colliding architecture, transport, fashion and technology tell a compelling story. They say a picture is worth a thousand words. These past-meets-present images are worth much more than that.” 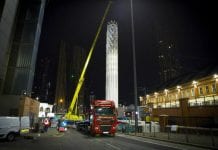 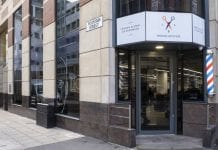