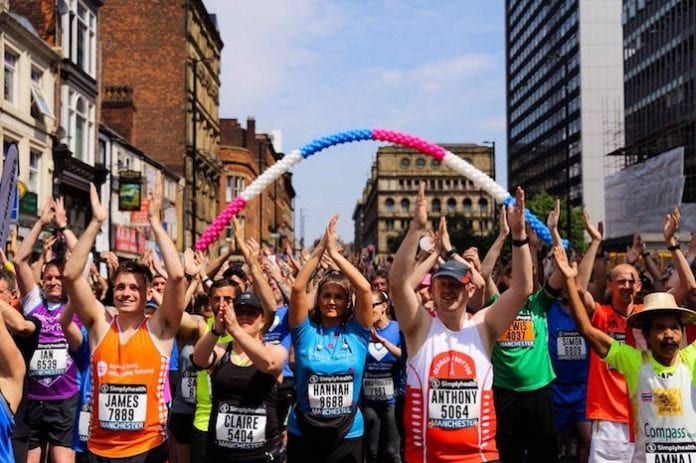 One year since the Arena terror attack, Manchester continues to show solidarity and resilience.

Whether it is singing in a choir, running a marathon or donating to a charity, the people of Manchester have come together once more, to honour those who lost their lives so needlessly on the 22nd of May last year.

Because we will never forget.

Emotional scenes as a minute’s silence is held at the Great Manchester Run in tribute to those who died in last year's attack in the city. pic.twitter.com/n8Ook3VMtz

Following the minute’s silence in memory of the 22 victims, tens of thousands of runners set off from Portland Street on the famous 10k route through the city centre.

Almost exactly a year on since the terrorist attack, the marathon has become a symbol of solidarity – with brave survivors taking part as well.

15-year-old Freya Lewis, who had to learn to walk again after the bombing, was the honorary starter in the junior event this year. Martin Hibbert, who was paralysed in the attack, completed the race in his wheelchair.

Martin, who was only 10 metres away from the device when it detonated, said he took part in the 10k event for those who died in the attack. His daughter suffered life-changing injuries.

Mo was victorious in his very first outing on the Manchester 10k course and Tirunesh retained her crown in the elite women’s race.

Wow, what a privilege to be with @SurvivorsChoir for their last rehearsal before #mcrtogether One Voice. So so moving. Good luck all #RiseUp pic.twitter.com/hhkTpnaaMV

Every fortnight the choir, some of whom were badly injured in the blast which claimed 22 lives, come together at Sacred Trinity Church in Salford to share their experiences or simply lose themselves in singing.

On the 22nd May they will perform at the Manchester Together – One Voice memorial concert in Albert Square.

Cath Hill, 45, who had taken her 10-year-old son Jake to his first concert, and Carys Crow, 18, started the choir after meeting on a survivors’ WhatsApp group set up by the police after the attack.

“We left from a different exit, so we did not experience seeing people dead or in great distress,” Cath told the Mirror. “But everyone was screaming and we really did think another attack was imminent.

“We are coming together to support each other and using singing as therapy.”

“We were waiting to get out when the bomb went off,” said Carys, who was at the Ariana Grande gig with best friend Ella.

“Somebody shouted there was a gunman so everyone panicked, we ended up under a pile of people.

“I’ve struggled a lot with anxiety. Some days you don’t want to get up because the world can seem like such a bad place.

“But there are so many good things in the world, too, like the friendships and kindness that came out of it. The choir has been amazing. Now I have the choir I feel a lot safer and understood. I’m at peace.”

Teachers and classmates of Olivia Campbell-Hardy, who lost her life in the Arena attack last May, are asking people to remember her one year on by helping others to keep her passion for the arts alive.

The 15-year-old Tottington High School pupil was a talented performer who “was born to sing and dance” and dreamed of becoming a music teacher.

Following her tragic death, Olivia’s family set up Liv’s Trust in her memory, a charity that aims to help young musicians and performers achieve their dreams.

To honour her on 22nd May, Olivia’s teachers and classmates at the Bury school are asking people to make a donation to the charity.

“As we near the anniversary of the Manchester Arena tragedy, our staff, students, governors and parents remember those who lost their lives in the tragedy on May 22 2017, and we especially remember Olivia Campbell-Hardy who was a student here at our school.

“She is sorely missed by our community and especially to those who were closest to her.

“We would like to pass on all our sympathies at this difficult time to all the friends and families of loved ones lost in the tragedy.

“As a school community we are obviously marking the anniversary and are doing so privately. We would ask that parents and members of the public do not bring flowers to the school but instead we would ask that you consider making a donation to ‘Liv’s Trust’.”

Anyone wanting to make a donation to Liv’s Trust, or who would like to fundraise for the charity, can visit www.justgiving.com/livstrust for more information.