The weather is finally starting to look up, and there’s plenty to smile about in Manchester this week.

The final designs being chosen for Bee in the City mean that we’ll soon get to see a range of unique giant bee sculptures in the city when they go on display in July. Salford Red Devils’ Magic Weekend commemorative shirt, which also features the conic bee logo, will help to raise money for the we Love Manchester Emergency Fund. And the sun really is here to stay – at least for the next few days, when Manchester will be hotter than Barcelona.

Bees in the City sculptures

Last week saw the final designs being chosen for Bee in the City. Hundreds of regional and national artists have submitted their unique designs hoping to see their work adorn the giant bee sculptures that will be part of a city-wide public art trail this Summer.

The 180 designs, which will be whittled down to just 85, are an ode to the city and its wide-ranging passions, with artists and designers submitting work of starkly varying styles encompassing fine art, illustration, graffiti and mosaic.

Puntastic names include Hac-Bee-Enda, Sir Matt Buzz-Bee, Hive Talkin and To Bee or not to Bee? and take in music, football, iconic figures, pop culture and television programmes.

“We have had an overwhelming response from artists who want to get involved with Bee in the City,” says Sally-Ann Wilkinson, Director of Wild in Art, the curators behind the project.

“The level of talent in the designs submitted has been really impressive and we are excited to reveal the shortlist to our sponsors. There’s a difficult task ahead in choosing which design they want for their bee. I imagine there will be a real buzz in the air as they make their final decisions.”

The bee emblem has been part of Manchester’s heraldry for over 150 years and is synonymous with the hard-working people of the city, their social cohesion and sense of community, and the city’s pioneering and creatively industrious spirit – pollinating progress and renewal.

The public art trail will run for nine weeks, after which the sponsored bee sculptures will be auctioned off to raise funds for The Lord Mayor of Manchester’s Charity We Love MCR.

There will be a further 15 bees created by community groups working collaboratively with artists and arts organisations. These will remain within the communities that help create them to serve as a legacy. 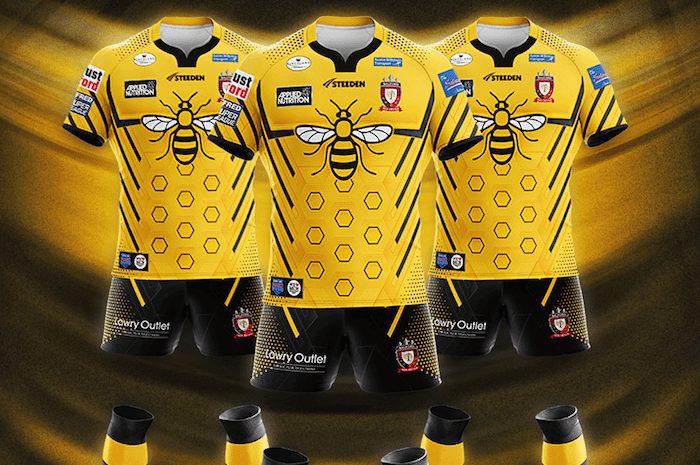 This season’s Salford Red Devils Magic Weekend commemorative shirt will unite the cities of Salford and Manchester, almost exactly one year to the day since the tragedy at the Manchester Arena attack claimed the lives of 22 people.

The limited edition charity kit for the game features the iconic bee logo on the chest, with £5 from each purchase going to the We Love Manchester Emergency Fund.

“One year on our community remains very much affected by the events of that night,” said Red Devils’ managing director Ian Laithwaite.

“Many supporters, not just from Salford but from the rugby league family as a whole, know of people caught up in the tragic events and when we sat down to decide who we should support with our Magic Weekend shirt this season, the decision was made in an instant.

“The timing of Magic Weekend on the eve of the anniversary will be a poignant one for families across the north of England, and we are

proud to be able to play a small part in the events being held to commemorate those who lost their lives so needlessly.

“Many of our fans, staff, players and partners attend the Arena on a regular basis with their families, or live in Manchester. It is therefore something close to all of our hearts.”

So far, more than £20m has been raised by the Emergency Fund, with over £16m having already been committed to helping those who suffered in the attack.

Get ready for the sun

According to the Meteorological Office, we can expect temperatures of 19°, 20°, and 18° on Wednesday, Thursday, and Friday respectively in Manchester.

Time to dig out the sunscreen and celebrate with a crisp gin and tonic, surely?