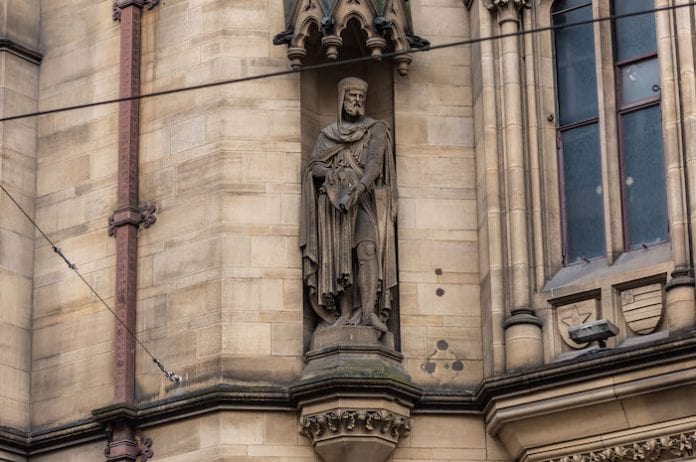 This is the year of Peterloo 200, the 200th anniversary of the most dramatic and violent event in British political history. A crucial incident in the battle for civil and political rights.

A hundred years later, Manchester was at the centre of another intense political campaign – the bid to get the vote for women.

So it is apt that outside the Town Hall, the home of Manchester democracy, there is a statue of a man holding a stone representation of the Magna Carta, a cornerstone in the story of how people fought for basic civil rights.

The statue is of Robert de Gresley, a 13th century Lord of the Manchester Manor – the man in charge of the town in those pre-democracy days.

Robert de Gresley (1174-1230) was the first Lord of the Manchester Manor to live locally, probably where Chetham’s now stands. In 1215, he was one of the barons who confronted King John at Runnymede and forced him to sign the Magna Carta. Hence the statue.

Although records for who controlled Manchester in ancient times are sketchy, the Gresley family was in control of the growing town for around two hundred years.

After the Norman Invasion of 1066, William the Conqueror gave an area known as the Salford Hundred to a favourite baron, Rogier de Poitevin.

De Poitevin later handed the land to Albert de Greslé (also known as Greslet or Gresley) who became the first Baron of Manchester. The Gresleys brought with them their coat of arms – a red shield with three gold stripes to show they were a religious family. The red represented the blood of Christ, the gold was from the Old Testament verse: “The silver is mine, and the gold is mine, saith the Lord of hosts” (Haggai 2:8).

Strangely, every book on Manchester history, including the famed Red Book which the council published when the Town Hall was opened in 1877, cites the statue as being that of Thomas de Gresley, a descendant a hundred years later. However, the name Robert can clearly be seen written on the statue.

The story of Manchester in 101 objects: #22 the scientist who changed the way th...