The story of Manchester in 101 objects: #3 the rise of Christianity 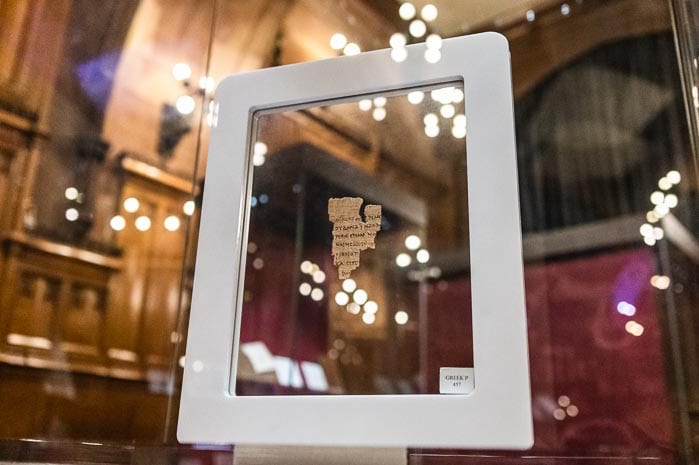 In Object No 2 we learned how Christians were almost certainly present in Roman Manchester around 180 AD, long before Rome became Christian, thanks to the accidental discovery of a piece of revealing pottery.

So it is fitting that Manchester is home to the oldest piece of the New Testament ever discovered.

The St John Fragment is a tiny piece of papyrus just three inches high, a codex not a scroll, handwritten in Classical Greek on both sides.

It was discovered at Oxyrhynchus (also known as Behnesa), the ruined city in Upper Egypt, and acquired on the Egyptian market in 1920 by Bernard Grenfell, Professor of Papyrology at Oxford.

Handwriting experts initially placed the writing at around 125 AD, but later research puts it nearer 200. It can’t be carbon dated for it would fall apart.

The text comes from St John’s Gospel, Chapter 18, verses 31-33 on one side, with parts of verses 37-38 on the other side. The King James Bible translation from the section reads:

32 That the saying of Jesus might be fulfilled, which he spake, signifying what death he should die.

33 Then Pilate entered into the judgment hall again, and called Jesus, and said unto him, Art thou the King of the Jews?

37 Pilate therefore said unto him, Art thou a king then? Jesus answered, Thou sayest that I am a king. To this end was I born, and for this cause came I into the world, that I should bear witness unto the truth. Every one that is of the truth heareth my voice.

38 Pilate saith unto him, What is truth? And when he had said this, he went out again unto the Jews, and saith unto them, I find in him no fault at all.

The relic was sent to the Library but not catalogued for 15 years when papyrus collections were finally sorted. It is now on display in the Rylands Gallery of the Library.