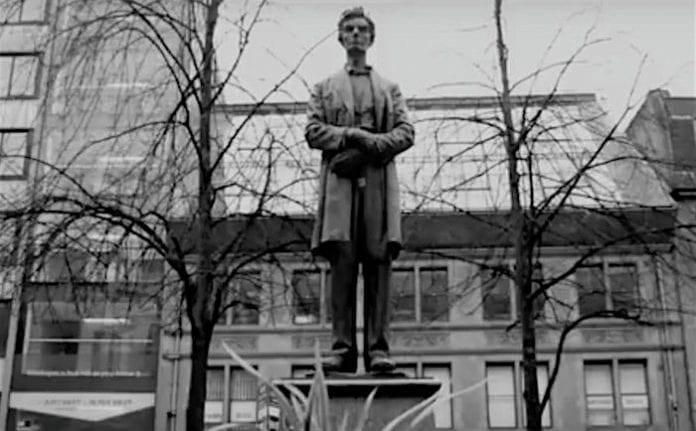 Manchester played a major role in slavery in the 18th century – and then played a bigger role in the campaign for its abolition.

Burgeoning industry in Manchester prospered from the raw cotton picked by slaves in America. Locals involved with the slave trade included the Hibberts, who owned sugar plantations in Jamaica; Samuel Touchet, an 18th century merchant who imported cotton from the Levant and the West Indies, and paid for the invasion of Senegal in 1758; and the better known Heywoods who dealt in African goods including ivory.

They invested in more than a hundred slaving voyages from 1745-89, and then gave up their involvement and went into banking. Heywood’s Bank still stands on the corner of St Ann Street and St Ann’s Square. Their descendants became morally upstanding liberals in the 19th century.

How did slavery work? The slavery triangle saw ships laden with goods made in England, particularly Lancashire, head to west Africa where the population warmed to the light cotton garments and household appliances such as pots and pans.

The ships then filled with slaves chosen from the local slavemasters. The ships headed over to America, and there the slaves disembarked and were herded into the sugar plantations and cotton fields. The ships then returned to Britain with sugar and raw cotton.

Why did Manchester’s support for slavery crumble?

Some of it was altruistic; some solipsistic. One factor was the Industrial Revolution, which made merchants realise they could prosper more from the new machinery.

Meanwhile, at the end of the 18th century the ideas of the French Revolution began to gain ground. When the leading abolitionist Thomas Clarkson spoke at what is now Manchester Cathedral on 8th October 1787, he was met with a huge crowd including around 40 black people.

Clarkson had travelled over 35,000 miles, mostly on horseback, through Britain interviewing 20,000 sailors. He had collected artefacts such as leg-shackles, thumbscrews and branding irons. His plan of the Liverpool slave ship the Brookes showed how 450 slaves were packed like sardines below the ship’s deck.

Clarkson was received rapturously. “When I went into the church,” he recalled, “it was so full that I could scarcely get to my place; for notice had been publicly given, though I knew nothing of it, that such a discourse would be delivered. I was surprised also to find a great crowd of black people standing round the pulpit. There might be forty or fifty of them. The text that I took, as the best to be found in such a hurry, was the following: ‘Thou shalt not oppress a stranger, for ye know the heart of a stranger, seeing ye were strangers in the land of Egypt’”.

Clarkson’s visit led to the formation of a number of anti-slavery organizations in Manchester: the Anti Society Slavery Union; the Constitutional Society; the Ladies’ Anti-Slavery Society; the Emancipation Society; the Manchester Union.

Petitions were raised in many towns in support of William Wilberforce’s first bill to abolish the slave trade. Manchester’s was the largest, containing 10,639 signatures. Sadly it was lost when the Houses of Parliament burned down in 1834.

In 1792 Manchester’s anti-slavery committee promoted a boycott of West Indies sugar. Samuel Bradburn, a prominent Methodist, explained how “I have given up the use of sugar in everything, except medicine; and shall continue till the slave trade is abolished”. He urged members of his Methodist conference to abstain from “a drug comprised of the slave dealers’ sin and misery.”

Some former slaves became well known in Manchester. Henry “Box” Brown was born on a plantation near Richmond, Virginia, in 1815. In 1849 his master refused to buy Brown’s wife when she and their children were put up for sale. He was determined to escape from slavery, and so he posted himself to Philadelphia in a box. The 350-mile journey took 27 hours. In Philadelphia the box was opened and Brown jumped out to declare: “Good morning, gentlemen!”

Brown arrived in Liverpool in 1850. He toured the north of England with an exhibition called “The Mirror of Slavery” and settled in Manchester. The 1871 census records how he and his wife were living in Cheetham, where with great irony they were doing well enough to employ a servant.

His story, The Narrative of the Life of Henry “Box” Brown, Written by Himself was printed by Lee and Glynn, 8 Cannon Street, Manchester.

Slavery in Britain was abolished in 1807. In 1833 it was abolished in the British Empire. But the full implications of the sordid business hit home in Manchester during the American Civil War of 1861-65.

War in America meant that the raw cotton picked by slaves in the Southern states that the Manchester economy relied on could no longer enter Lancashire. The government passed a law banning such imports. Here in Manchester the mills closed. Thousands were thrown out of work. With the streets filled with destitution, the Manchester establishment held a meeting at the Free Trade Hall on New Year’s Eve 1862. Despite the suffering, the people voted to support Abraham Lincoln’s moral stand against slavery.